Italians in Thailand/3: more on the seafront clique - Pattaya 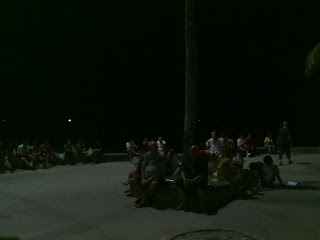 And then there are non sex-related scams as well.

- "What did you say? Your visa is about to expire? No problem at all, we can arrange a return trip to the Cambodian border. It won't take more than two, three days at most. You pay us and we'll take care of everything...great, isn't it?" And then it's all a sequence of inflated prices: transportation, accommodation, immigration procedures, duty free, casino, meals, revelries, imitation Viagra and, if one cannot stay away from them even for a couple of nights, more hookers, just to have a taste of Khmer culture as well, besides the Thai one, because after all you don't get to know the world just by listening to what other people say, looking at it from behind a car window or reading a few pages of a travel guide: you need first hand experience, meeting the locals...that's the secret!
"Give me two more boxes of that generic Viagra then..."
I suppose that the whole trip will cost him no less than 10000 to 15000 baht (about 300-500 USD), but it might be much more depending on the vices the dupe will indulge on. If he only knew that various agencies in town organize visa runs by minivan, leaving at 6am and returning at about 3 pm on the same day, for a total of just 2000 baht (70 USD), including the Cambodian visa. They would only need to know ten English words. Or the help of an honest Italian, of course...

- "You're sick of Pattaya? It's always the same story, too many tourists, too much confusion, too hot? Really? And you've heard that there are some charming, cool and quiet villages in the north or the north-east provinces? You would like to visit them but you don't know where to start from? Of course there are! And do you know what? My lady comes just from one of those little towns. We also opened an Italian restaurant there, so you won't miss your pasta even in the middle of the jungle...ha ha ha! If you want tomorrow I can take you there." And then there comes the usual refrain: "You pay us and we'll take care of everything...great, isn't it?"
Private limo prices for a seat on a local coach, Chinese spaghetti cooked with Thai ingredients, made on a stove in the garage of the hovel where the family of the girl lives. Expensive beer bought from a friend (hush...it's past midnight and they are not suppose to sell it...). They even charge him for the accommodation: an exotic, original and authentic experience made of synthetic mats, rock-hard pillows, clay floors, rat, insect and reptilian rustling to soothe him to sleep (a bit like the gentle pouring of a little fountain) and the unmistakable building site angle grinder frequency of grandpa's snoring as alarm clock (going off at regular intervals of fifteen minutes).

And unfortunately this isn't all. Because there are also a few appalling anecdotes (yeah, more appalling than the ones you have already read about) that end with permanent damage.

- The co-stars here are girls (maybe provided by the same rogues, but through a third person, secretly plotting, because this story is too gross, even for them) that let themselves be seduced by some man and then make sure they get pregnant through some dirty tricks. A few months later the unaware father will be approached by a dozen cheerful youngsters riding modified motorbikes, at night, in a dark alley, where the only things that shine are the blades of the knives they are holding. They show him a photo of the young girl holding a child, and they ask a big sum as a first installment to support the kid. Questions such as "Who are you?", "What do you mean by first installment?" and "What kid? I don't have any kids!" are only thought, because that shiny steel is giving him a hoarse throat and he doesn't feel like talking much. He asks them to follow him to the nearest cash machine, withdraws as much money as he can and gives it to them. They keep calling him now and then, asking more and more money. The rat is trapped and can be harassed at will. He keeps receiving calls when he's back to Italy as well: as a sign of respect for the local customs the requests are expressed in thousands of euros now. In the meanwhile he has managed to meet the girl and get a child's hair, or some such sample, that he then took to a lab. The DNA test confirmed the whole story, but he had only needed to take a close look at the kid's face after all. Getting hold of his son is not an option. For cowardice or threats, who knows. And then there might be lots of complications with the Thai law.
After the latest extortion he decides to stop it, he throws all his SIM cards away and when he returns to Thailand he doesn't go to the usual places anymore. In the meanwhile he managed to get out of the Italian clique's grip, he learned those few English words that he needed in order to get some degree of independence, went to the north and met a good girl, one with a job, moral integrity and dignity, who wants to marry him. The knives gang didn't show up again. For the moment.
Ah, the main character of this story, a little like S, is unknown. Therefore we can call him U. His identity will remain a mystery but for sure he is not the only one who has been ground by the gears of this cruel mechanism (cruel for him, the child and in a way for the girl as well).

I did go to look for the dolphins monument myself. It's exactly where Pattaya Klang road intersects Beach road, right where the T junction is. It's a vaguely disconcerting place, upsetting, that touches you where you thought you were protected. At night at least. A sort of non-place that escapes categories. It reminds me a little of the vulture like place in Bangkok's Sukhumvit, an outdoor version of it. Dozens of women and men are sitting or standing around and in the middle of a circle. Some of them are talking in groups of two or three, others are by themselves. That same impression of a club with no music, where the sound effects are provided by those in the vicinity who are just minding their business. The waiters moving chairs and picking up glasses there, people driving cars and bikes here. There is very little interaction between these men and women. And this is also a paradox in a way, because everyone knows what most of them are here for. Some men are sipping a beer bought at a convenience store nearby, but the majority of them is abstaining from that vice as well. I even spot a woman knitting. There are also the usual sidewalk residents, some of them are sleeping, others are eating, talking, looking around with a bored air, begging. I can hear people speaking German, English, French and obviously Thai. I walk around for a while, take pictures, listen, but I can't spot any Italians. Then I remember S' words: "I've already checked the place since I came back, they are not there now. And...listen to me, forget about crusades, names, photos, letters, bills, warnings. Those people have nothing to lose, god knows what they are ready to do. Just try to stay away from them..."
But this is just a simple post in a blog that few (but good haha) people read, it doesn't meet the requirements to qualify as a crusade. Besides that I wouldn't have been able to keep the story to myself.

As I haven't personally experienced any of this stuff there is always the possibility that it's just pure fantasy or exaggerations. In that case this is all just a lousy horror tale, pretty harmless at that. But judging by the series of clues, intersections, partial confirmations that I've gathered the possibility that this is just the plain and disconcerting truth is fairly high. Such a sequence of chance coincidences would be hard to believe.

Although these stories are very sad you shouldn't get the wrong idea of the place. If you happen to come here don't worry too much about it. Thailand in general is a very safe and fun place. You just have to be moderately careful. If some ugly mugs draws near you or hassle you, do like S said: just try to stay away from them....

The end...or at least I hope so

As the photo was taken at night, with an old-fashioned phone (and by a bad photographer) I'm publishing three more of them...I'm not an expert but maybe when it comes to "foto-reports" of places of ill-repute four lousy shots are equivalent to an acceptable one. 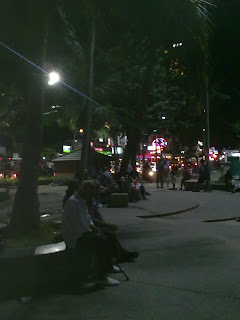 A close up of two old men and in the background a herd of whores and whoremongers...and now you can say that I am prejudiced and rude! 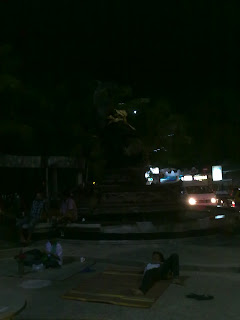 Some of the typical sidewalk residents. In the background, almost indistinguishable, the dolphins statue. 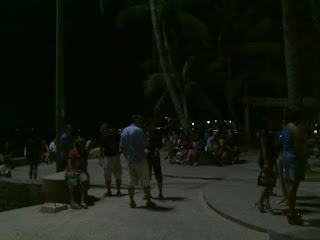