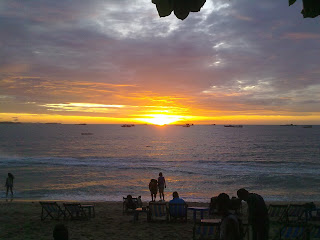 If you haven't done it yet you can read this propaedeutic post before you proceed.

"They are wretches, living hand to mouth. They loaf around the dolphins statue and are often arguing over one baht (equivalent to 1/30 of a dollar, or 3.3 cents, Fabio's note)"
That's how S' story starts. Not because this is the first thing he told me but as this is the most accurate and to the point description that he managed to give me of those scoundrels. Few key words with heavy implications: wretches, hand to mouth, loaf around, arguing, one baht.
Among the waves of the rough sea of faults that I've always tried to fight back, one of the few qualities I know I can count on is that of making people who have a story to tell trust me. Perhaps it's because I have never turned anybody down and people can feel that I don't have any intention to use their words against them: vibrations that reach their hearts, brains, souls - or whatever the element is where these sensors are hidden - and reassure them. Because S has got a whole sack of manure to empty: he has carried it around on his shoulder for too long but he doesn't want to unload it in front of someone who will use it to throw excrement at him. I only intend to take a look at it, maybe a little sniff so that I can tell you about it, but I definitely don't wanna handle it and hurl it at his face. That's why for the whole length of the story S will simply be called S. Which is not the initial of his name but of the word someone, just someone. And I will be very careful not to disclose any information that might lead to his identification, even though he did provide lots of details about himself and his past, some of them rather embarrassing. This post only wants to tell a (nasty) series of stories that in five or six years happened not only to S but to other Italians he met, and who knows to how many other people. And hopefully to forewarn those who might fall into the same traps. That's all. Here are the stories then...

Besides loafing around and arguing over one baht in the area that surrounds the dolphins statue the Italians of the clique always keep their eyes wide open. When a fellow countryman walks by - especially if he looks a little lost, wary, naive, frustrated, curious, anxious, keen on breaking the ice with the place but at the same time lacking the keys needed to open the right doors, English language skills in particular - they struggle to weave a web and make sure that the victim gets quickly tangled in it. Their tactic, like most of the cowardly ones, turns out to be extremely effective, because the poor guy is expecting anything but being ripped off by a bunch of countrymen ten thousand kilometers away from home.
Like experienced predators they start to smear him with words leaking sticky saliva, wrap him in a cocoon of attractive stories, inject him with narcotic tempting opportunities, sting him with the venomous fear of numerous pitfalls and dab at the inflicted wounds with the aseptic gauze of their precious tips and the painless disinfectant of their wise advice. When this procedure is complete the simpleton is totally stunned and ready to be electrocuted, plucked, singed and packed in one of the various scams tailored by this firm specialized in meanness and cowardice.

- Hey man, you wanna fuck? Here is a girl you can trust. We even taught her a set of useful Italian sentences. Of course we are not gonna mention the fact that after the ritual ciao and bello (hold your ego, they would say that even to the walrus-man), as soon as they set foot in your hotel room, with the vocabulary at hand they will only be able to put together less flattering and more blunt phrases that in English might sound like: now you pay me five more (now you are going to have to pay five times as much as the price we've just agreed upon, Fabio's note), you no give me fire you bed, me make noise, police come, phone friends problem. And at this point the poor guy, even if he could speak Italian better than the girl, which sadly is not true for all the tourists coming to Thailand from Italy, doesn't have the time to correct her mistakes and give her a lesson, however concise, on verbs conjugation, nouns and cardinal numbers. He will just grab his wallet and get rid of her, without probably even being able to take off one of her flip-flops. It's not a big deal though as his lustful voluptuousness had already faded away. And a few minutes later the members of the clique will be grinning after having shared the loot with the girl.

- That guy was even lucky, in a way. Because sometimes, and god knows based on what criteria the selection process is carried out, the woman doesn't even need to make a scene. She takes him to a 7/eleven, asks him to buy two coffees and manages to pour in his cup some powder that will quickly knock him down. Unfortunately in most of the cases we're talking about girls whose pharmaceutical skills are not very good and the guy will wake up after two, maybe three, sometimes even four days. That was not a typo, you got it right, I wrote days, not hours. Stripped of all his belongings, of course, but at that point glad for not waking up in front of St. Peter, or whoever it is that, equipped with halo and condoms, welcomes cheated whoremongers to heaven or hell. Ah, of course...a few minutes later the members of the clique will be grinning after having shared the loot with the girl. I bet you remember having already read that before.