AirAsia: not so cool anymore 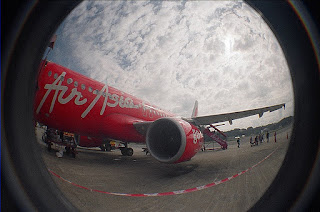 Having been a rather regular customer of AirAsia - since the beginning, when they were still using old planes and few people trusted them (“They are always late...they'll lose your luggage.” was the typical refrain people were singing in Malaysia) - I can say that their online booking procedure was fast, simple, transparent and fair, their prices among the cheapest and their brand one of the coolest. Well...not anymore.
Going through just a few screens, filling a limited number of fields and clicking some buttons one could choose date, destination, number of passengers, one way or return, could select their favorite flight among the available options, enter their personal data, the credit card ones and that was it. As I said: fast, simple, transparent and fair. No free meal and no seat allocation, true, but their prices were dirt cheap, really unbeatable on some routes.
This took by surprise the traditional carriers that lost large shares of the market while AirAsia, from a small player of the low cost niche, became one of the sector leaders. A real success story for Tony Fernandes, the Malaysian who, from a Warner Music manager, after acquiring an almost bankrupt state owned airline, got to be one of the richest and most innovative Asian entrepreneurs.
Little by little the disbanded forces of the enemies managed to reorganize themselves, filling the gap, while AirAsia incredibly decided to waste its resources of know-how and excellent reputation accumulated over the years, starting to make some of the same mistakes that had forced their competitors to give up their leading positions, plus others whose copyright its management is fully entitled to claim.

Prices went up until they matched and - for some routes and time frames - even exceeded the ones of the traditional airlines, whose offer in terms of quality of aircraft and service is better, while the characteristic features of a low cost carrier where all retained: meals, insurance and seat allocation are still provided upon the payment of a fee. Topping this up with other silly stuff, often hard to understand, such as the Xpress boarding, the counter check-in and the Big shot ID (what does that mean?). Not to mention the last master touch: the credit card payment processing fee, meant to subsidize the investments made to increase the security of online transactions, something that AirAsia, being a company that processes the vast majority of its sales with this procedure, should have the duty (not just morally) to provide free of charge.
The most annoying thing, however, is that all these non-free services are automatically assigned to the user who is purchasing a flight, who, in case he were not interested, would have to deselect them manually, sometimes following procedures that are little clear and very twisted.
As I wanted to corroborate all this with an example I recorded a simulated online purchase of a one way flight from Bangkok to Saigon (Ho Chi Minh City). Initial price: $76.95. The final one turned up to be almost 60% greater! Insurance, meal and seat allocation strictly not included.
Just to make a comparison, websites like Edreams and Opodo, on the same date, were offering Turkish Airways and Qatar Airways flights (very high quality airlines) for the same or even cheaper price. Obviously all those services that AirAsia was charging for were in this case included. And the final price was just a little higher than the initial one.
There goes the video with comments (watch it on Youtube, not here). Enjoy it.


Photo of AirAsia plane by en-shahdi (CC)
Posted by Fabio at 5:08 PM

I agree with you about the sneaky hidden add-ons - they're not obvious at all and you really have to specify that you don't want them.. however, I seem to remember reading in the business paper that budget airlines have seen their profit margins increase significantly by introducing them..

Jonathan: I'm sure they have, in fact many people don't notice those add-ons and end up purchasing services they don't want/need.
How long will it last for though, as on other sites you can flights of much better airlines with a more transparent and fast online procedure, maybe even at a lower price?
Thanks for your comment.

we also have seen a lot of this sneaky stuff with air aisa.

i plan to put a link to this from eqi.org customer service page if i dont forget!

seems u are still around asia

please drop me a note -- maybe we can meet somewhere!!

Hi Steve!
Great to read your comment here.
I'll sure drop you a line.
Cheers

You MUST red this blog ... AirAsia have never played fair. Are they safe? Read a few articles: http://airasiaannus.blogspot.com/

Thanks, I'll have a look