A soundless shout of the mind - Bangkok, Thailand 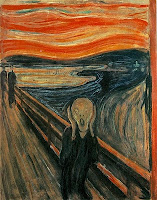 I'm drinking a beer - a rock tune shakes the air -
I'm leaning on a van that has been turned into a bar.

Suddenly a voice thunders out in the street,
or it might just be a soundless shout of the mind:
"No, no, no! Some women don't get it,
it's all a misunderstanding.
We are not looking for sex, stability, surrogates.
The Beatles were right: All we need is love".

Some ladyboys toss, squawk, point at something. Everybody turns around but the action is gone. A foreign tall guy, wearing linen clothes, stands still for a while and then walks away. There's another man on the ground, motionless, bleeding. People rush to give some help, while the culprit is shown to a couple of cops. He draws near, gesticulates and tells his story. The other provoked him with two kicks in the groin, he endured the first one and then knocked him flat. He's arrogant and tipsy. People stare at him, it seems that they have already decided to blame him. The cops take him away and an ambulance arrives. Some paramedics remove blood stains from the victim's face: he writhes while a tourist tries to hold him still. They ask him some questions, he only answers Russia. A few moments later he opens his eyes, then without saying a word he hits the tourist with a jab.
Suddenly everybody is assailed by a doubt. Judging by appearances is a risky gamble. The beanpole is arrogant but he might not have lied, without even been listened to he was handed over to the cops. And a naive tourist, helping his victim, as a token of gratitude got punched in the face.
Photo "Fighting wolves" by Tambako the Jaguar (CC), from flickr
Posted by Fabio at 1:20 PM No comments:

A knobby vehicle stops by the curb. It's a modified motorbike, with added wheels. The guy who drives it, bony and dark-skinned, gets off and starts to move on all fours. He hangs about the tables of an alfresco café, stops near the customers and waits for their charity. People don't mind him and keep on chatting. A tourist who notices him puts a hand in his pocket, fishes out a note and hands it to him. The beggar doesn't take it and shakes his head. The tourist waits, then puts the money away. The Laotian snorts and makes for the bike, then stops, turns around and starts to yell. He's speaking English, insulting, swearing. People fall silent, the waiters come out. The tourist is stunned, he takes all the abuses, nailed to his embarrassment by that pointed finger. It's a delicate situation, the circumstances are odd, every reaction at hand is a double-edged weapon. He looks away hoping that it will end soon. It was a small denomination note, but it was the only one that was offered to him.
Why that scene? There can be many reasons. This kind of people have complicated issues: they sink in the abyss of synthetic drugs and alcohol. Another explanation, more general and just as sad, is that Vientiane is no longer a remote destination. Expensive cars, modern gadgets, fashion clothes, new trends. On the other side of the river the lights of Thailand shine. Organizations and tourism bring in money and globalization. Along with living standards, vice and confusion increase. A city beggar is not a montagnard from a village: he can turn down a tip and angrily shrug, point a finger at you and start swearing in English.

Photo of a beggar in Bangkok, by Fabio Pulito
Posted by Fabio at 4:19 PM No comments: 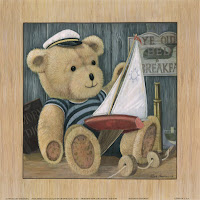 The water-heater doesn't work, I inform the receptionist. The little man replies with his condensed English: check tonight. He smiles and I smile back before I go to the beach.
I come back in the evening and turn on the shower. Tropical weather can make you sweat and suffer but don't expect it to help you to bear freezing water. I wash up fast, with clenched jaw and teeth. Before I go out I tell the receptionist. The man sympathizes, gets sad while he listens, it seems that he's the one who took a cold shower. He rearranges his face into a Teddy Bear smile and selects another entry from his disarrayed phrasebook. Check again!
When I'm back to my room I find a different heater: it's older than the other one but the light is on. Unfortunately the water doesn't get any warmer. I go down to pick up a new Teddy Bear smile: the solution is the same...once more check again. The third machine is a modern antique. Discouraged, I wait with my hand in the water. Surprisingly enough it gets a bit warmer. I let the man know, he is satisfied and smiles.
Smiling in Thailand is a multi-functional gesture: it can break ice barriers or hide one's embarrassment. Sometimes, in a hotel, at a southern island, it can even be used as a customer care tool.

Image "Sailboat Teddies", by Ruane Manning, from Allposters.com
Posted by Fabio at 2:30 PM No comments:

Tribute to Surrealism (and Dadaism) 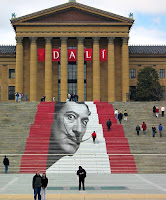 Photo "Salvador Dalí on the steps of the Philadelphia Museum of Arts", by Max Buten (CC), from Wikipedia.org
Posted by Fabio at 2:19 PM No comments: 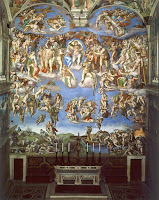 They say that in 2012 we will all drop dead. Some deny it or make fun of it, while others minimize it: there won't be any catastrophe, nor a last judgment: it'll be a revolution, a change in social order. At first I brushed it off, laughing with scorn. But little by little I'm changing my mind: I perceive an opportunity in the catastrophe theory. I've been wondering for years what I'll be doing when I'm old, weak, ailing and without a pension. Suicide is a possibility, the intimate solution, but I lack the courage of the great men, or even the discipline of the Samurai. A powerful cataclysm might give me a hand. 2012 is a little early though: if only it could happen a few years later than that...

Photo of The last judgment, Sistine Chapel, Rome, by Michelangelo Buonarroti, from Wikipedia.org
Posted by Fabio at 3:01 AM 3 comments: 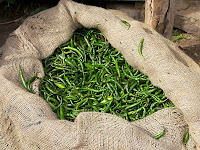 He's nibbling at a Som Tam in an Isan restaurant. He discards every seed, pseudo-seed and red bits. When it seems that he's done it a drama takes place: he mistakes a green chili for a shred of long bean, he absentmindedly forks it, chews it and swallows it. For a few illusive moments nothing happens, like the lag between the release and the burst of a bomb. Then his palate explodes and his face flares up. Torrents of lava flow on his scalp and brow. The organic device travels the digestive canal, setting tongue, stomach and sphincter on fire. They say that chili is an excellent disinfectant. Call him skeptical, narrow-minded westerner: he still prefers mouthwash and bidet.

Photo "Green chilies sold in HAL market in Bangalore, India", by Rajesh Dangi (CC), from Wikipedia.org
Posted by Fabio at 11:01 PM No comments: 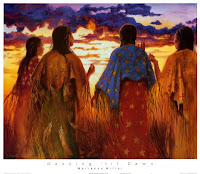 Last night he gave up, overwhelmed by sleep. He fought for a while against the weight of his eyelids. Then he remembered his friends' advice. Why do you care? Tomorrow always comes. He's not that sure, chromosomal skeptic. But he concedes that at the end they've always been right. Anyway today you've got no excuse. You've slept enough, you don't have to work, tonight won't end until dawn says so. What's the point? You might be thinking. The point? Well...why? He replies with surprise. Tomorrow, as you say, will probably come. But the day after that...well...how do I know?

Image "Dancing 'til dawn" by Marianne Millar, from Allposters.com
Posted by Fabio at 8:24 PM No comments:

(Spring 2007)
The foreigner is tipsy when he gets to the club. He circles the dance-floor, walking next to the tables. Some Chinese call him, hand him a small glass. He smiles, grabs it and toasts with a man, but when he's about to the the same with another guy, the first one stops him and asks him to drink. One more glass, another toast, and so on with all the members of the merry group. It's whiskey and green tea, not a good drink, but sweetish, watered down, easy to swallow.
The awakening is an inter-dimensional trip: as it often happens since he arrived to China he wakes up and feels lost, in an unknown place. However this time the sensation remains. Lying on the couch he stares at the ceiling, he dreamed of the vomit that is on his face. He turns his head defying a migraine and spots two girls who are sleeping on a bed: he remembers that one of them was at the club. He lifts the blanket and he's a bit ashamed when he notices that he's wearing someone else's boxers. He still hasn't managed to put the pieces together when his fingers touch a wound on his brow.
He was staggering and swaying when he walked out of the club. The girls helped him to get on the cab, but when he was about to tell the driver the address, his brain switched off and he collapsed on the seat. With some help from the driver they took him home. He fell on the stairs and hit the rail with his head.
In the past other foreigners were drugged and robbed, but he can see his belonging on a table in front. The girls give him water and fix something to eat. They cleaned him and undressed him, sent his clothes to the laundry. In the West this is is considered a normal behavior but in China these things can't be taken as granted.
An Italian who lives in China explains in his blog that in order to understand what happens in that country one should always remember the following statement:

According to Wikipedia a possible translation is:

There is government, when the prince is prince, and the minister is minister; when the father is father, and the son is son.
(Confucius, Analects XII, 11)

The order of human society derives from respect for hierarchies. According to Confucius the five bonds are:

In the list "the fellow men" just don't appear, those neighbors that "thou should love as thou love thyself".>> (From Itariajin)
Our drunk foreigner was lucky enough. Even in China - sometimes at least - exceptions step in to prove the rule.

Portrait of Confucius by Wu Daozi, 685-758, Tang Dynasty, from wikipedia.org
Posted by Fabio at 6:38 PM No comments: