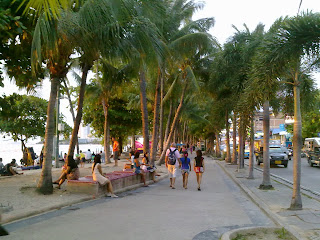 Pattaya's promenade could really be a nice place. Its wide walkway where one can stroll, jog or sit down and watch the bay, its palm trees and the colorful multi-ethnic turmoil behind. Even the scant depth of the beach, only a few meters, from this point of view can become an enriching element in the composition of the picture: those looking at the sea will enjoy the deceptive impression of a single-phase horizontal plane that, although veined and streaked with ripples and shades, within the macro-element framework (water, sky, headlands and hills) appears pretty much like a uniform body, with hues that depending on the hour and the weather conditions can vary from dirty sleet to rhino armor, passing through the various standard gradations of flask glass and summer alpine sky.
It could be a nice place, indeed. But it turns out to be one of the most decadent (if not even degraded) areas of Pattaya, which in turn is one of the most decadent cities in South East Asia. One should wonder why the authorities have decided to loosen their grip on it to such an extent, to ignore it altogether in a way, when there already are lots of red light districts in town, catering to vice lovers of various kind, and this area could be the perfect haven for the innocent side of the city tourism.
I don't intend to launch a crusade against decadence, god forbid. Actually it has always wielded a magnetic influence on the darkest side of me, a sort of sinister charm, Baudelairean, if you can excuse the rather pretentious parallel. As a matter of fact I often come here, among other places, to look at the pageant of free lance prostitutes sitting next to the flower beds, those who don't want to - and often cannot - find a job at the go go bars or the bar beer of Soi Buakhao, Beach road or Walking street, or those who used to have such a job and for god knows what reason (it's better not to investigate too thoroughly) lost it. The customers who approach them with circumspection, hesitant, as if they got there accidentally and had been attracted by a shop-window where they spotted the latest model of their favorite phone. The most obscene ladyboys of Eastern Thailand. The placebo pills, ground hay and plaster scraping dealers. Those who actually sell the real stuff and maybe after having dealt a dose they hand the sucker to the cop they are in league with, who will share with them the sum paid by the victim to avoid legal consequences. The beggars who've reached the final stage (in particular that of the scale of personal hygiene). The impostors with the most bizarre skills.The stinking soup street vendors. I find all this very intriguing. Cross-sections of corrupt society, vice juices, social sewage that I use to dab at the wounds on my soul caused by too heavy doses of sophistication, conformism, etiquette ethics, aseptic and politically correct patinas. A sickening and corrosive mixture that eats into my outer metaphysical layers that I absolutely have to dilute with some healthy, genuine disgusting stuff.
Therefore I'm not suggesting to get rid of all that, but besides being a soft libertine I am also a tolerant liberal who thinks that in this world there is room for everybody. As there already are various circles of hell scattered around town I don't see why the families with children, those who want to walk their dog, the couples who intend to enjoy the sunset and those who just like to spend hours sitting near the shoreline with a book (I'm one of them, my interests are in fact various and polymorphous) have to be deprived of the promenade too.
The matter becomes even more sordid when one finds out that Pattaya's promenade is also the operations center of a clique of Italian scoundrels (and who knows of how many other nationalities): wretches without any prospects who live by their wits and manage to float on the sewage they wiggle in (even pushing each other down) by cheating their fellow countrymen, the most vulnerable ones, on their first visit, just arrived, solitary travelers (and quite lonely as well), preferably old, who don't speak English and before crossing the Asian Acheron had never been out of their hometown. I had often heard about them, but they were just hints, muttered half sentences, information gotten by hearsay, third or fourth hand stuff. Then one day I met S, who told me that...but I'd better stop here, as this will be the topic of the next post of the Italians in Thailand series.
Posted by Fabio at 1:32 AM