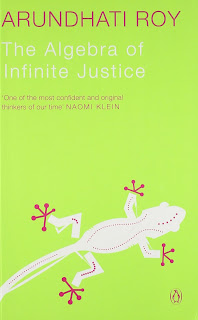 I read Arundhati Roy’s bestselling debut novel “The God of small things” many years ago. It’s a fantastic story about castes, power, exploitation, love and violence. “The algebra of infinite justice”, on the other hand, is a non-fiction book: a collection of essays and articles that Arundhati wrote between 1998 (the year Pakistan and India tested their newly developed nuclear weapons) and 2002, one year into the war on terror waged by the US and their allies after 9/11, when talks about attacking Iraq after Afghanistan were mounting.
The themes of the book are pretty much the same as the ones of the novel, but on a much wider scale. The topics are both diverse and deeply connected. The surging wave of Hindu nationalism (bordering fascism) that swept over India after the nuclear tests and how this is getting to the very ancient soul of the country. The mega dam projects that destroy entire ecosystems and displace millions of poor and powerless people. The effects of corporate globalization, free market policies and privatization of public services on the social and economic system of India and other developing countries. Religious conflicts in India (particularly chilling is the account of the 2002 pogroms against the Gujarat Muslim community - tolerated, if not outright encouraged by the local government, headed back then by the current Prime Minister Narendra Modi). And finally the relation between Islamic terrorism, US foreign policy and the Cold War.
Arundhati also discusses the roles of writers and activists and challenges the idea that only experts have the right to talk about topics that actually affect the lives of pretty much everyone. It’s really amazing how she can put together superior narrative skills, social and political insights, global vision, courage, intellectual independence, logic and competence. She says so many things I’ve always thought myself but have never been able to express so clearly and convincingly. And she is always so forward-looking: this book is twenty years old but some of the chapters could have been written ten years from now for how visionary they appear.
Read it, and if you haven’t read “The god of small things”, well, read that as well.