This changes everything - Naomi Klein 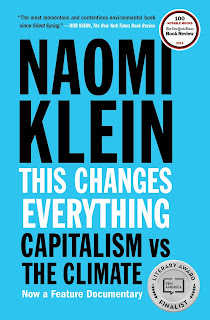 Although I’ve seen Naomi Klein’s books on bookstore shelves dozens of times, this is the first one that I actually bought and read. For some reason I thought she was a particularly literary version of a no-global fanatic. And I am not very attracted by fanatics, even though their cause might be a noble one. Damn, I was wrong. She is quite the opposite: a competent, clever, original opponent of neoliberal and free trade fanaticism. In this book she tackles the effects of the modern capitalist dogmas on arguably the most precious thing that we - as a community, a living species, and an integral part of nature - all posses and share: the earth, its ecosystems and delicate balance.
More than three decades after the first intergovernmental climate-change related debates and agreements, carbon emissions, rather than being reduced or at least kept stable, have increased manyfold and global warming has reached unprecedented levels, causing ever more frequent and devastating natural disasters all over the planet, the poorest parts of it in particular.
Why? What happened?
Well, almost simultaneously a wave of neoliberal policies, free trade agreements, corporate globalization and an unbridled capitalist ideology, with its corollary of business deregulation, austerity, public spending cuts and privatizations, has turned entire economic and social systems upside down.
Naomi Klein explains how this mad mutation of capitalism, aided by an ever more self centered, hedonistic and greedy consumerist culture on one hand and a huge political void on the other, has lead to a massive increase in oil, gas and coal extraction, most of it with new, risky and polluting technologies such as hydraulic fracturing (aka fracking), tar sands, deepwater drilling and mountaintop mining.
She goes on explaining what the viable alternatives to this destructive system are and how they will never be implemented if the initiative is left to the market, the governments or supposedly good willing multi-millionaires, as the changes needed would go against the interests of some of the world’s richest and most powerful corporations, which are generously lobbying the political class that is supposed to implement those reforms. A political class that even if not lobbied would have to take measures that contradict the dominating economic ideology that has driven its activities for decades.
Change has therefore to happen bottom-up, rather than top-down, through a switch from individualistic to communal mentality, through workers co-ops and citizens groups that would take back control of local grids and decision making platforms.
She also enumerates a few examples of regions where this has already happened (we’re talking about countries like Denmark and Germany, not some backward soviet oriented state), and other places where groups of common people are opposing extractivism and are being brutishly cracked down by the local authorities.
This book is an eye opener, highly recommended.
Posted by Fabio at 6:32 AM