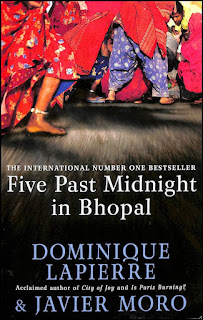 I’d already read a couple of books by the French author Dominique Lapierre. I particularly liked “Freedom at midnight” about India and Pakistan independence and partition, which I read when I was traveling in the subcontinent. “O Jerusalem”, about the birth of the State of Israel and the first dramatic days of war between the Jewish state and its neighboring Arab countries, is also a very good one.
“Five past midnight in Bhopal” takes us back to India, a country that the author knows well. Lapierre often collaborates with some colleague when writing non fictional works. He wrote the aforementioned books together with the American journalist Larry Collins and this one with Javier Moro from Spain.
Bhopal is for chemical accidents what Chernobyl is for nuclear ones. Before the early minutes of the 3rd December 1984 Bhopal was known for being one of the most beautiful and best administered cities in India, but ever since that moment its name has brought to mind the biggest chemical disaster of all times. An extremely toxic cloud escaped a methyl isocyanate tank at the local Union Carbide plant - built to produce the Sevin pesticide - and instantly killed or badly injured tens of thousands of people (death estimates range between 15000 and 30000).
Lapierre and Moro skillfully reconstruct the series of events that lead to the building of the plant and eventually to the catastrophic accident, taking into account both the point of view of the managers and workers of the American corporation and that of the dwellers of the slums that were most badly hit by the toxic gas cocktail.
As it’s always the case with Lapierre’s books, history and investigative journalism go hand in hand with accounts of human hopes, happiness, disappointments, joy and suffering. It’s an enriched way of learning history. And if you, like myself, are into anything related to India, this is a must read.
Posted by Fabio at 6:25 AM