The pope's lesson in style (in politics) 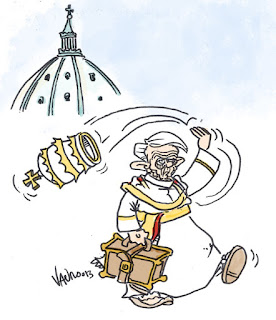 I've never really been what you may call a devoted believer. Come to think about it, I might not have a religious side at all, in the most orthodox sense of the expression. Unfortunately the only aspect of my character that invades the sphere of mysticism is my bent for blasphemous outbursts, something that would make my mother, a rather sober-minded woman, quite sad.
However, there is a thought of a theological kind that has been gnawing at my attention in the last few days. It's about the recent pope's resignation and the relevant jokes I've heard and read about it. I honestly can't understand how come the thousands of Facebook and Twitter users who post daily indignant comments about greedy, corrupted and immoral politicians unwilling to give up their posts, inviting them to "go home", didn't celebrate in unison the news of the pontiff's resignation, opting for a pointless kind of pub-like humor instead.
We are talking about a guy who has a right to have his robe stitched to the papal throne upholstery for life, who admits he's not able to perform his duties anymore and spontaneously leaves his post. I would have expected a standing ovation at least, first and foremost from the fiercest among the church opponents. I personally did it, even though nobody could hear it.
In my opinion, as a head of state, Mr. Ratzinger (I call him Mister for I refer to the man, the politician, rather than the religious figure) can teach lessons in honesty, maturity and most of all style to most of his lay colleagues.

PS Well, I feel a bit uneasy after having taken a pope's side (well, maybe not really). I absolutely need a profaning bath in order to purify myself. I'll do it right away with an irreverent observation: I think that, compared with the new one, the previous pope had a much better face for caricatures.
Posted by Fabio at 3:08 PM