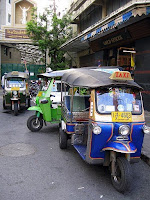 The detractors of the protest movement have pointed out that while the interminable parade was advancing through the streets of Bangkok, bringing Saturday's traffic to a standstill, the strategists of the demonstrations would have been using groups of motorbikes and cars, making them move fast in order to pop up at different locations within minutes, giving the impression of being in control of a much larger group of supporters than they actually are. Realistic, and probably true. Things like this happen everywhere: everything is fair in love and war.

Undoubtedly though, the reds have found a source - probably not unexpected - of fresh forces in the crowds of Isan-born taxi and moto-taxi drivers. They come from the provinces of the little developed and culturally Laotian north-eastern region, the same where the majority of the demonstrators come from and the same where the sequence of parties directly or indirectly founded by Thaksin Shinawatra have harvested votes by the rice sacks. The important difference is that the taxi drivers, being already living in Bangkok, didn't have to travel for hours to reach the capital and don't have to camp for more than a week on the streets and the squares of the city center.
In the last few days I've often happened to be in a taxi, with the radio broadcasting the red leaders' speeches and a waving flag tied to the aerial outside: every time that the vehicle came across a pick-up truck full of red shirts the driver, from Ubon, Khon Kaen or Khorat, honked, greeted and if he was waiting at a traffic light, he'd open the window, say something, crack a joke and encourage the protesters. A lot of drivers did join the parade on Saturday or went to work donning a red shirt and hanging out the movement ensigns.
The protest goes on, the demonstrators went back to their camp but don't seem to be willing to retreat. The stock of green papaya hasn't run out yet. Thaksin is urging them on from Montenegro. Abhisit, the Prime minister, said that he's eager to start talks, provided that the reds' supreme chief - and the backer of the entire venture - is left out of the negotiations. Unlikely, unless some of his lieutenants opt for a sensational stabbing in the back.
The city, curious, exasperated, amused or enraged, awaits for the next political developments.

Photo of Bangkok Tuk Tuk, by Fabio
Posted by Fabio at 6:52 PM