He turns around for the hundredth time. His head has sunk once more into the pillow but one eye is still staring at the guitar in the corner. He read, wrote, browsed and played: a triathlon among pages, screens and chords. Then he's stored everything, he's brushed his teeth, done push-ups and hit the sack. He's read one last chapter with tensed cheeks and brow, then he thought it over and blamed it on his hormones, got a pack of tissues and did more exercise. But he's still there, staring at nothing, only a part of his body finally asleep. 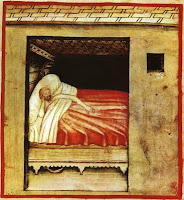 The guitar is calling him and he doesn't reply, but it's like trying to sleep in a busy steel-mill. He puts the book aside and grabs the instrument. He turns on his laptop and finds the exercises, then he tries two or three chords yet doesn't strum. He checks the time, it's morning already: the ban on the noise no longer applies. They call it insomnia, but it's not his case, when everybody else is trotting he falls asleep. And while his thoughts are bumping into each other, he hits the first chord of How do you sleep by John Lennon.


Image "Insomnia, tacuinum sanitatis casanatensis" from wikipedia.org
Posted by Fabio at 8:41 AM

I mean this article and I mean that song "How Do You Sleep"..you refer this article to yourself if I'm not mistaken?

The character is unnamed! haha

Yeah...But I thought you're referring to yourself...he he..You're a freelancer right? In what field?