When everybody was starting to believe that the situation was finally getting back to normal, that the political deadlock and the Bangkok unrest was only a bad memory of long time ago, the Cambodia-Thailand dispute over the temple at Preah Vihear, so far a totally separate issue, has surprisingly managed to revive the polemics. Thailand has asked Interpol cooperation to arrest the former Prime Minister Thaksin Shinawatra. And what was the latter's next move? He managed to be appointed economic adviser to the Cambodian government led by Mr Hun Sen. 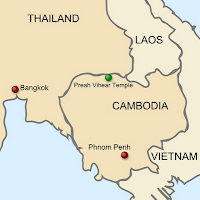 To make things worse an interview  with Mr Thaksin appeared in the newspaper "The Times". The content of the article was considered offensive to the Monarchy by many in Thailand. Mr Thaksin stated that "The Times" report was distorted and now both he and the Thai government are asking explanations from the newspaper editor.

According to the latest news the Thai government is ready to fly its citizens out of Cambodia should the diplomatic row between the two countries come to a head.

In the meanwhile, in the expats forums, people seem to be relieved because the border hasn't been closed and their visa runs are still guaranteed.
Well, if they are happy with that...