Two foreign guys and two local girls are sitting at the table next to ours. There's something familiar about their conversation. I ignore my friends and eavesdrop a little: I was right! The guys are speaking English when they address the girls but when they are talking to each other they switch to Italian and even to some kind of Veneto dialect. They spice up their speech with curses and obscenities and sometimes they insult the other patrons of the restaurant. 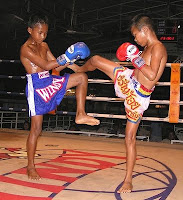 There's a lot of noise and I haven't heard if some of the comments were aimed at us. To avoid misunderstandings I crack a joke in Italian. One of them stares at me with a blank expression and I think that he doesn't understand what I'm saying. Then he starts to talk but he's totally drunk. In the sequence of hiccups, grunts and oaths, I decipher the gist of what he's trying to say: as I don't come from Veneto as they do, I cannot get some nuances of their conversation. To prove that he's wrong I start to speak our dialect. Once again it takes a while for him to understand, but when he does he stares at me, then he stands up and shakes my hand, says that I'm cool and gives me a drink.

The excitement fades and I sit down. After a few minutes I've already forgot them. While I'm chatting with my friends everybody turns around: all of a sudden a row broke loose. All the male waiters are amassed at the entrance, surrounding the two Italians who are yelling at them. Then one of the Thais hits one in the face. Few seconds later the tourists are down, while a cloud of waiters is kicking them. I can barely see one of them running away but when it is over his friend is still there. He slowly stands up with a bleeding face, then holding his nose he shakily leaves.

Although this is a very typical scene it never fails to unsettle me. Taking for granted that the Italians were wrong, even that they might have deserved some of it, I wonder what drives some of these people, devoted to Buddhism and to a never mind doctrine, to an utmost rage and unlimited violence. Is it because boxing is the national sport? Or because they endure in silence up to a breaking point? Or maybe every culture has its own relief valve, and if in the west it is politics and football, for some of these mild Thais it's bloody fights.

Photo by Siren, from wikipedia.org