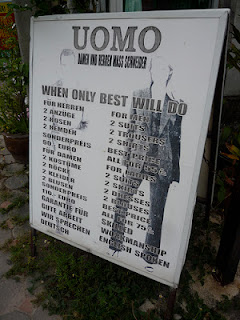 Two things can surprise Asians when they first meet me.
One is my age, and I'm pretty used to that: since I was ten I've developed (esthetically speaking) much slower than the other kids my age. At junior high and high school this was causing me problems. I was often treated as a lower grade child, especially by the girls...and I couldn't take comfort in the attention of the younger ones: at that age a two year difference is as important as a geologic era. The only thing I could do was wait and hope: there were no other solutions. And fortunately it worked. From the age of twenty on my babyface has become less and less of a problem. Nowadays it can even be a relief, especially when I meet some old friends from school or university, white-haired, bald, wrinkled and bloated.
The other thing that can make many Orientals goggle is my nationality. Italian? Really?! I would have never said that. I thought you were...and then they start listing an incongruous sequence of countries I might come from: France, Switzerland, England, Belgium, even Holland! Total confusion, any place would do, except Italy.

Actually as a typical Italian I'm not bad at all, no one at home ever thought I was a foreigner, unless I was strolling in San Marco or Signoria square absentmindedly looking up at some detail of a building. I don't really embody the ideal of the Mediterranean man (as well as many other Italians, even from the South, by the way): I don't have black hair, dark eyes, constantly tanned skin, thick beard and shaggy chest. The hair on my arms is light colored and so thin that one can hardly see it. And this seems to be enough to disqualify me, East of the Urals at least.
The only ones who almost never guess wrong are those Indians who sell suits and dresses to foreigners in the tourist areas of Thailand. With just a few seconds at hand (the distance that separates two people walking on a busy sidewalk is never greater than five meters and they can only work on one pedestrian at a time) they quickly glance at me and then they confidently say Italiano? Buonasera! Obviously I keep going...I haven't bought a suit since 1936 and those aggressive sales techniques - the guy's body used as a barrier, a smile rehearsed in front of the mirror and the attempt at shaking hands with everybody, abusing a gesture that, like it or not, is a serious one - tend to annoy me. Besides that, being recognized - once I got used to escape easy classifications - suddenly makes me feel vulnerable, unmasked, somehow naked.
Come to think of it though, assuming that they can also guess the nationality of the other tourists, that is a surprising skill. Of course, as with any other activity, after trying it every day, many hours a day, with a numerous and various sample of targets, everybody might be able to learn the trick. However, as I have never tried it myself, I still think it's quite remarkable. And that's why everytime that this happens to me I feel like I'm back to junior high school, when someone drew near from behind you and pulled down your sweatsuit pants, leaving you there awkwardly trying to pull them back up, redfaced and unable to decide whether you should look cross at the guy or smile at the others who are laughing at you. Hoping that there were no girls among them: looking like a child is alright, but like an idiot is not!