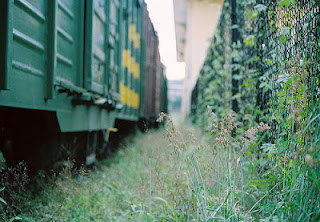 Human resource experts are interviewing candidates for a good corporate job. What's the best way to make sure they're selecting the smartest people, those able to think outside the box, to break out of their comfort zone, to adapt to change, to expect the unexpected and any other common place they like to use in that field? Those cunning sneaky questions of them? Hmm...you can easily find the best answers on the web. Group sessions? They often turn out to be sad displays of ill-concealed aggressiveness. And again, instructions can be found online. No, none of that stuff will really help. My suggestion? Vietnamese railways. Here is a good test for you, recruiters! The state railways of Vietnam.

We just got out of the train from Hanoi. I show my ticket and I'm allowed to pass. I'm in Sapa, at last. LM does the same. LF as well. C follows suit. L gets stuck. The guard won't let him pass. L spreads his arms. Then he looks at the guard and points at us, free, beyond the bars of that cage that is trapping him. The guard is not moved and keeps asking him to show his ticket. We giggle. L's face is flushed. He is irritated, amazed, outraged: he's not allowed to get out of the station because he can't produce a ticket that has already been checked two or three times. He can't believe that his freedom is being restricted because of a fare that he regularly paid. His expression is asking an unanswerable question. What if I am not able to find it? Are you going to keep me here forever? To arrest me? To hold me hostage? To kidnap me? At what point will your overreaction to this non-problem stop?
Of course from a theoretical point of view he's totally right. That guard is not blocking him for his company's sake, because of the ticket or the payment of the correct fare. It's not a matter of justice, but of justifications. He's just doing it in order to legitimize his role, his same presence there. Because he was told to do it. This is something that happens all the time in communist countries, especially the Asian ones. People must be given a job, even a useless or, as in this case, a counterproductive one. And it's when you are having problems with this kind of employees that you're suddenly kicked out of your comfort zone, the box where you usually think, forced to adapt to change, the unexpected that you should have expected, much more than when you're facing a bunch of recruiters in a conference room on top of a corporate tower.

Finally the ticket pops up. It had been hidden in one of the backpack pockets, or forgotten on the car seat. The guard is satisfied and lets L walk through the gate. In case he hadn't been able to find it he'd have had to go to the station master's room, wait, talk his way out, maybe pay a fine, or a bribe, who knows.
Next time, if it happens to you, just keep in mind those few simple rules, stay focused, keep smiling, feign calmness and friendliness. And most of all stay clear of any conflict, don't make fun of them, be ironic or sarcastic. You'd only be satisfying one of your needs, not theirs. And if you want to get out of a mess you have to focus on the latter. Otherwise you won't convince them, you'll just upset them and make them even more stubborn.
Just let it go. Over your head, through your body, between your legs, under your feet. It'll be over sooner that way. It will also be a good self-control exercise and you'll be able to laugh about it. Not straight away maybe, but sometime.
Just try then, let it go, don't resist, let it go, you see, you already feel better, let it go...let...it...go...

Photo of a Vietnamese train by Khánh Hmoong (CC)
Posted by Fabio at 2:44 AM