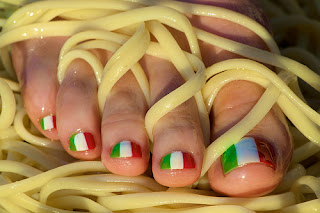 Proud of one's homeland, of a cultural lineage, proud of a faith, proud of this, proud of that, proud, proud, very, very proud! Why so proud then? For what reason should I be proud to be Italian? Or European, Venetian or white for that matter. What can possibly justify the pride for belonging to a nation, to an ethnic group, a certain region instead of another?
Wait a moment, don't dismiss the matter too hastily...this isn't absolutely meant to be a politically correct, do-gooding, fence-sitting kind of post: all attitudes that I am by no means interested in. That actually even tend to annoy me. I mentioned Europeans and whites but the same questions that I'm asking myself can apply to anyone. Why should an individual be proud to be American, Pekingese, black or Muslim? It's exactly the same issue.
I'm European, Italian, Venetian, white, a baptized Christian but not exactly a believer. I might be happy to be all or at least some of these things, the circumstance can make me feel happy, or at least not too unhappy.
For example I might like to be related to a certain cultural heritage, a history, a mother tongue, a cuisine. Even though we should then ascertain what degree of relation there is between me and those aspects of the group or the groups I belong to. I mean, if I have the right to be proud of all that, what should the claims of a luminary, a great critic, an outstanding poet or a first-rate chef be?
Or maybe it is a less romantic and more practical matter: it might in fact be very convenient for me to hold a passport that allows me to enter many countries without having to go through extremely tedious bureaucratic procedures, having received a good and relatively inexpensive education or being able to use a wide range of modern infrastructures and public services. Even having the same somatic features of many Hollywood celebrities. I might also envy someone for being born where and how I was not. But if I were I wouldn't definitely be proud of it.
The fact is that I didn't have to move a finger to get all that, or better, to be all that (and the difference between the two verbs is not marginal at all). I owe that to the fact that I was born here and not there, from this couple of parents instead of that. Anyway, it's got nothing to do with something I did.
Leaving aside the fact that pride often turns out to be a vice instead of a virtue, or that nationalism works perfectly as a fuse for conflicts and that religious or race pride have been the cause of genocides and ethnic cleansing, I've always believed that one is authorized to be proud of something that depends on him, that he personally did, that he somehow deserved. But being proud to be born in some place or to belong to some ethnicity is as justifiable as bragging about an inherited title of nobility or fortune, or feeling guilty for some misfortune that happened  to us by mere chance, attitudes that normally everyone tends to discourage. Why then just accept, or even foster this odd form of pride?
Not only we are pride of something that we can't lay any claim to, we are even proud to be proud!
This is nothing more than an illusion: that of a virtuous multiplication, when what we are actually doing is only adding vice to vice.

Photo by Sirsnapsalot (CC)
Posted by Fabio at 11:57 AM