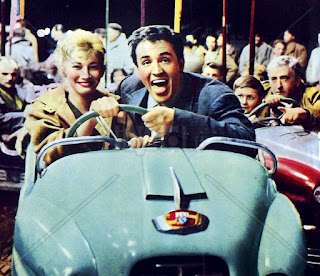 I'm staying at a fancy hotel, which I'm not paying for, of course. It's not a luxurious one but it's good enough to make me feel some sort of moocher. Sometimes a bit out of place too, as if I had been the object of a name mix-up. Actually it used to happen especially at the beginning, because one quickly gets used to superior standards and starts soon to take certain privileges for granted. Never mind, there is no danger of permanent damage: within few days the fun will be over, I'll jump down from the comfortable mattress covered with silky linen and soft pillows and I'll return to bite the dust raised by the soles that thump on the hard road surface. Well, so to speak, just to give a couple of brush strokes of vivid melodrama.
One of the things I got hooked to is the newspaper slipped every morning under my room door by an extremely kind stranger. It's already there when, with two tiny slits carved on my mole-eyed face, I rise on the top of the night and I shuffle to the toilet to urinate the cups of scolding tea that I noisily suck in before falling asleep, while I watch the movies or the TV shows that I normally use to hammer down the gibbous surface of a light insomnia.
I remember one morning when I though I got hold of yesterday's copy. It's not possible - I thought - that a piece of news like this is on the front page two days in a row! To be honest the first time I saw it I already thought it shouldn't have been there. Nonetheless, for more than a week after that, every single day The New Straits Times has opened with updates on the same topic: the new regulations imposed by the Indonesian government on the Malaysian employers that hire the numerous maids migrating from that country.
"The number of employees is bound to decrease by..."
"Very strict regulations to curb abuses and control minimum wages!"
"The workers will have to earn a minimum wage of RM 700/month to carry out ONLY ONE task out of the four they have been trained for."
"The memorandum subscribed by the two countries will come into force from..."
And then a bunch of comments of the Malaysian journalists worried about the consequences of the measure, interviews with panic stricken citizens. Appalled mothers, terrified fathers, heartbroken children. A whole country on the edge of a collective breakdown. The reason: the imminent extinction of the Indonesian maid, a species of pets that everybody got terribly fond of. Surreal.
This is a topic that in other countries only a tiny minority of the population would be interested in. Hold on, we're not talking about caretakers for elderly or disabled people here, professionals who offer services that turn out to be necessary everywhere, but of workers who carry out ordinary household tasks. In short, what we commonly used to call servants until a few decades ago. Those hot simpletons with a Venetian accent (I come from Veneto, therefore I can dare the racist remark) of the comedy movies based in Rome in the sixties. Prerogatives of the noble class or of rich entrepreneurs.
Neither I nor most of the people I know, except for some special cases, has ever had a maid at home. The one performing most of those duties in my family was my mother, that saint woman. And for most of the time she also used to have her own job.
Considering the importance that is being attached to the debate and the unseemly reaction of the public one might think that every Malaysian family hires a maid. An not just that. Taking into account the average salaries and prices and the workers' rights standards of the country it's perfectly possible that the concerns of the Indonesian government are justified!
For the moment the Indonesian government is playing cat and mouse with the Malaysian one. And the latter, after having possibly underestimated the matter at negotiation stage (there seem to be a memorandum signed by both parties), under the worried look of the public, is forced to fall for it, making somehow a fool of itself. For the time being, in fact, it's the Indonesians who are holding the whip - or more precisely the duster - hand.

Image: Vittorio Gassman and Carla Gravina in "Big deal on Madonna street" by Mario Monicelli
Posted by Fabio at 6:19 PM