Bigoli around the world 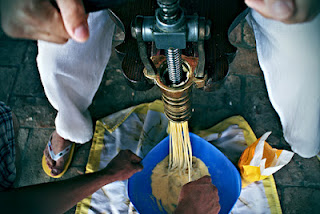 When we're traveling it might happen that curiosity gets the upper hand over caution. So we start to try, dare, experiment. Sometimes we even risk, and maybe we get into trouble. Perhaps the adrenaline that trouble can synthesize is precisely the X factor that we are looking for. Some other times, tired of surprises after the first few weeks of travel (never bored though), we start to feel the alien place out in search of more familiar spots, where the complications of our lives as strangers are temporarily solved. Simplified lapses of time. A bit fake maybe, but realistic enough.
When it comes to food I am fairly intrepid but sometimes, especially if I have access to a kitchen and I don't need to fall back on some Italian restaurant abroad, I like to refresh my memory of familiar flavors, so familiar in fact that they might have got stuck to my chromosomes. A gourmet version of The call of the wild, one might say.
With time I've learned that there is also a middle way though. At the end there always is one, isn't there? For example searching a foreign cuisine for similarities with one's own. Dietary affinities that alleviate our palate's longings, nourishing at the same time the ever burning exploring spirit.
For example a few years back F - a friend of mine who can easily wolf a 400-500 gram bowl of spaghetti down for dinner - came to see me while I was in Thailand. The tiny portions of rice that one is supposed to top up with spoonfuls of food scooped up from dishes scattered around the table and shared by the whole company didn't exactly thrill him. He found his balance between homeland habits and local specialties in phat thai, a dish of noodles stir fried in a wok with vegetables, meat or prawns and soy sauce, finally sprinkled over with ground peanuts. He loved to sit at those typical sidewalk-restaurants and order plate after plate of it, stirring up amusing reactions among the Thais, who rolled their eyes about at the second order and from the third one on used to serve him yelling and laughing with ever growing excitement. "One more!" "hahaha" "Another one!" "hihihi"
Back to our food parallels, experience taught me that cousins of pizza can be found pretty much everywhere, and they often are very delicious discoveries. As for pasta, due to its origin, Asia is definitely the safest bet. From China to Indonesia, from Korea to Laos, spaghetti, maltagliati, hair angels and ravioli are almost always easily at hand. They are not made of durum wheat maybe, but other grains, rice, soy and oriental versions of egg dough turn out to be very valid substitutes.
Every Italian though, besides the usual national specialties, is likely to have their favorite regional dish as well. As for myself, being from Veneto, I definitely go for bigoli. Bigoli are a sort of very thick spaghetti (almost half centimeter in diameter), with a very peculiar texture and rough surface. These characteristics are due to the use of soft wheat (sometimes even eggs) and the extrusion - or "drawing" - process by means of a specially designed bronze-press (bigolaro - see picture above), which in the homemade version is operated by hand. A type of pasta that - while chewing it - gives me an unmistakable, half-orgasmic, addictive sensation. I almost feel a greater pleasure digging my teeth into it for the first time than savoring the rest of the dish itself. Something of the sort gets hold of me when I bite into some Puglia orecchiette, and that is especially true in case two of them got stuck together.
That is the reason why every time I come across a type of Asian noodle with similar structure and dimensions I fling myself at it, forking with scientific approach, smelling like a puppy, softly touching it with lips and tongue to record its superficial physical characteristics, then I chew it, cautiously and slowly at first, then more and more daringly, with grindstone-like violence, classifying, ticking the boxes on a mental checklist of properties, arranging categories, comparing it with its distant Euganean, Berici or Scaliger relative in search of similarities and differences.
Finally, here is a list of my favorite bigoli-like noodles, drawn up over ten years of travels in the Far East. Unfortunately it's not too long but we're talking, after all, of a niche product:

- Udon (Japan): wheat flour, matte white color, medium-high coarseness. Served in soup, dry (hot or cold) with a dipping sauce on the side, or stir fried with meat and vegetables.

- Mi xian (Yunnan, China): non-glutinous rice flour, icy white color, medium coarseness. Served in soup or dry with a sauce - quite spicy - which is poured on top as we do with our pasta.

Please let me know if you have any more items to add.