At the alcoholics'/4 - Bangkok, Thailand 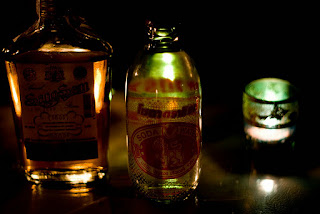 The whole series "At the alcoholics" is dedicated to Jack London, author of "John Barleycorn".
Continued from here.
I'm at the alcoholics with R. We're having a drink before we let the viscous Bangkok night swallow us up. R. stands up and goes to order a bottle of soda and some ice from the girl with the face disfigured by the bags under the eyes. On the way he says something to the constantly drunk woman. Bad mistake, not usual for a wise guy like R. Upon hearing his voice, even though she doesn't have a clue what he's talking about, she shrugs off her lethargy, takes a quick look around and her blurred radar, god knows why, stops exactly when it detects me. I keep an eye on her, careful of not staring, pretending to be looking elsewhere and - like a student facing her teacher who is scanning the names in the class register to decide who to examine - hoping to become an invisible presence and go unnoticed. Vain hope, naive as I am sometimes. She struggles to stand up, staggers while walking, almost knocks down the bottles and tables on her way and lands with a heavy thud on R.'s seat, right next to me. She looks at me and smiles, with a siren charm, an old siren, devastated by decadence, street life and alcohol. Then she mumbles something. While I'm trying to understand what language she's actually speaking, a carcass-smelling whiff grinds my throat. The stench keeps wafting in the air even after she shuts her mouth: it's not only her breath, it's a smell that her cloths and skin are imbued with, that she has got on her all the time. A little like the one given off by those people who eat too much garlic.
R. realizes what is going on and comes to help me. She smiles at him as well, turning him from a rescuer into a second prisoner. Soon after that we are joined by the bag-under-the-eyes-girl who, after putting down the ice bucket and the bottle of soda, talks to her in Thai, articulating her words clearly so that even I can understand her well.
"Hey, these guys are friends!" Well, maybe not exactly friends but, as this is simply a stratagem to get us out of a mess, we'll let her do what she pleases. We obligingly nod.
"You cannot try that with them...do you understand?"
Terror gets hold of our helpless and susceptible imagination. Try to do what? The thought that some tourist, stupefied by Sangsom, might have taken her to his hotel for a handful of baht clutches my stomach, tugging it forward, backward, sideways and along slanting lines. However the admonition works and the drunkard stands up and leaves, her pride apparently untouched. The ensuing relief relaxes my guts. R. sits at my side and we start to talk again, while the breeze of the fan blows the vapor of the ice toward the trees and the wet street.
Continued?

Photo by Lachlan Hardy (CC)
Posted by Fabio at 6:03 PM