At the alcoholics' - Bangkok, Thailand 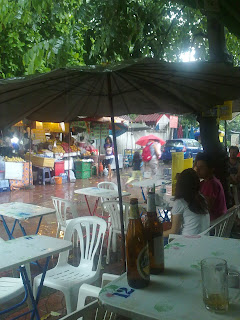 The whole series "At the alcoholics" is dedicated to Jack London, author of "John Barleycorn".

There's a little place in Bangkok, half restaurant and half bar. The kitchen is open until 4pm, and after that they will only serve you drinks. Most of the tables are outdoor, under the shade of the trees or of a few umbrellas with holes. It's one of those typical family businesses, with a couple of extra people who lend a hand. A place like many others in S.E. Asia, with wobbling plastic chairs, shaky tables, English menus with funny pictures and spelling mistakes, uneven floor and unwelcome fauna. An ordinary place, you might think. Well, only apparently ordinary.
Part of the staff only works for the restaurant, while others continue until the closing time. If you look at them carefully, you will notice that, like many of the regular clients, those who are employed at the bar-section have an obvious problem with alcohol. While during the day some of them are sober - though they cannot hide some clear signs of hangover - others go from one drinking session to the next one without any break, like a song in repeat mode that keeps playing forever. There's a skinny girl whose face is disfigured by two huge bags under the eyes, an older lady who drags her feet while she moves among the tables, a group of regulars, table permanently reserved, who have their first glasses long before noon and keep drinking until they go to sleep. The most disconcerting case is a 45-year-old lady who, like many Asian women, if seen from a distance might look like a girl. Normally at noon she is already tanked up. She sits in the shade, between the fridge and the coffee counter. Every now and then she stands up to carry out her tasks, which obviously don't include taking orders or handling food. She throws the menus on the tables of the new customers, puts the dirty dishes into a plastic basket that she picks up from and puts back under a tree. When the basket is full she takes it to the kitchen. She grabs a broom and she sweeps the floor without using a dustbin, just shoving the rubbish on the street. When she cleans the space between the tables, as she cannot control with accuracy the movements of the broom, she tickles the feet of the clients, most of which are using flip-flops.

One time, when I was having lunch, it started to rain. One of those powerful monsoon showers. A Korean couple was sitting under an umbrella dripping with water. I grabbed my phone and I got ready to take a picture but just when I thought that I had found the right angle, framing the couple, the rim of the umbrella and a section of the leaden sky, someone tapped me on the shoulder. I turned around, abandoning that perfect posture, and I saw the drunk lady smiling at me - showing a pair of toothless gums that I had never noticed before and that I would have liked not to notice at all - inviting me with gestures not to waste my time with Koreans, monsoon rain and the scenery, and to take a photo of her instead. She was smiling coquettishly, changing pose, bending her head, raising her shoulders, pushing her flat breast out (dreadfully swaying at every little movement), pointing at her face so that I wouldn't make mistakes, or maybe so that she wouldn't make mistakes. I laughed as if to invite her to fuck off, or maybe with a laugh that meant a straight fuck off, and I turned again to face my subject but, as it often happens in cases like this, the magic of that moment was already gone. Just as I was about to mutter a real "fuck off!" I held my tongue, regretting my disagreeable irritation, and when I was getting ready to do her that favor that didn't cost my anything, she had already forgotten everything, like alcoholics tend to do, had gone back to her place and had already sunk in her narcotized languor. I thought this was good after all: considering how she totters whenever she's standing the photo would have come out blurred anyway. And then, some pitiful scenes should never been immortalized.
Continued...
Posted by Fabio at 3:37 PM