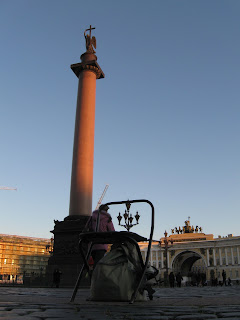 I'm following the continuous human flow of the Nevsky prospect sidewalk until it disperses in the huge space that surrounds the Hermitage, then I turn left, bound for St. Isaac's Cathedral. When I am a few meters away from this Russian version of Rome's St. Peter, I catch glimpse of a little paper stuck to a door, half hidden by the scaffolding of some restoration works. Museum of the history of political police. Basically a magnetized asteroid in front of which I suddenly turn into a tiny hair pin.
The church also exerts a strong attraction though. I stand on that place for a few seconds, my thighs shaking, following the alternating impulses that push me here and there. I process the little information that I managed to gather and I make a brilliant non-decision, postponing everything: typical of me in cases like this. The museum closes at 6pm and the ticket counter at 5.30. I still have thirty minutes left and the Cathedral is only a few steps away. I'm going there first and I'll see what she's got to say. If she whispers sweet words in my ears, gently tickling my lobe, I'm going to stay there, otherwise I'll come back here. And the latter is exactly what happens, only it takes me twenty minutes to realize it. When I open the door to the museum building it's already 5.26. After trying two dead corridors I manage to find the right one, I push the handle but the door doesn't budge. I am about to leave when I hear something creaking and I see a woman getting out of the room.
"Yes?"
"I'd like to visit the museum."
"I'm sorry, it's too late."
I put on a pitiful expression while I mutter something. She murmurs something back with an uncertain air. It's the cue I was waiting for: I move closer to her.
"5.30, closing time..." she says, while another lady pops up from behind the door and crosses her forearms like some kind of referee to make me understand that it's closed. I show them my phone that reads 5.28. Hand in d4: checkmate!
"OK, follow me!"
95% of the exhibition is explained in Russian but the lady hands me a set of plastic-coated sheets where one can find the photos mapped out wall by wall and the relevant captions translated in English. Although this is a good idea it also tells a lot about the scanty number of foreign tourists that visit the museum.
I've always been extremely fascinated by everything that has something to do with the most elusive, sinister and controversial aspects of history. I watch all the black and white photos, standing in admiration in front of those that thrill me the most, reading the explanations on the precious sheets that I turn back and forth. The old times of the tsarist spies, then the Bolsheviks and Dzerzhinsky restructuring. His death, the images of Trozky, Stalin, Bukharin and Molotov who carry his coffin. The CHEKA, the KGB, the cold war, the Cuban missile crisis and the secret prisoner exchanges with the USA. The missions in Afghanistan and Chechnya, internal terrorism and present day FSB.
In the wonderful room where Dzerdzhinsky used to work I run into a guided tour group. What a good choice, deciding to come and visit this museum I have taken care of two of my hobbies at once: history of espionage and beautiful women (in this case the hobby only consists in admiring them, of course). Now between a picture and the following one I can't help glancing at three or four specimens of these giraffes that have kept tormenting my thoughts since the moment I arrived to Russia.
Their guide is a pedantic and verbose old woman though: I leave them behind and in a matter of minutes I'm in the last room, where the lady who sold me the ticket, who had already come and helped me earlier, gives me some further interesting details. She's wearing a pair of slippers, thick stockings, a plaid-like-skirt, a felted sweater and G.P.'s spectacles. She has no make up and her hair is tied in a ponytail, of course. She reminds me of a librarian of a B-movie, and a little bit of Grandma duck as well. A very kind woman indeed. She plays down her nice gesture explaining that I owe the opportunity to visit the exhibition well after the closing time to the group of hotties that I've just seen: she'd had needed to wait for them to leave anyway. I ask her if there is a guest-book and while I'm writing my comments, choosing my words with care, she begs me not to mention the fact that she personally helped me.
"I'm not an expert."
"But you were great!" I answer thinking that it's just a display of false modesty.
"I do know some details but I don't have a good general knowledge of the subject. And then it could cause troubles with my supervisors."
It seems that she has been swallowed up by the atmosphere of secret and mystery that shrouds this place, as if she were also scheming in the web of an organization that operates in the dark.
"Well, in that case, I definitely won't!"
I end my comment writing that the staff is very kind and polite. This should be a rather discreet and neutral complimentary remark.
I steal a last look at the booted sex bombs that one after the other are flocking into the room and then I go out, while the powerful arms of the Baltic climate strike my face with a frozen whip. Fortunately it's still October. Not such a red October, but a rather gray one.

Photo "Alexander Column, chair and backpack" by Fabio
Posted by Fabio at 10:28 AM