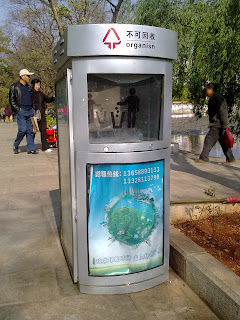 - One yuan coins are often given as change in Eastern China but are hard to spot in the west - e.g. Yunnan province - where only one yuan banknotes are used instead.
- At Kunming airport a girl hangs on to the hand and the laptop case of a guy, kneeling and sliding on the floor as if she was holding a skilift, yelling "I won't let you go...I woooooon't let you gooooooo!", while the guy - visibly upset and embarrassed - walks from counter to counter with that unusual, wiggling and noisy luggage on tow, alternating polite conversations with the airlines' employees - who try to pretend nothing is going on and often stare blankly at something else - and wild screams toward the girl. Now and then they stop arguing and start to hit each other for a few seconds, then they argue again and finally the man will head to another counter, always dragging the girl whose rubber soles slide on the smooth airport lounge floor. A friend of hers talks on the phone while people are watching the scene in silence, until a cop arrives and takes them to the local station.
She's her lover? He owes her money? She wants that laptop? She's blackmailing him? I'll never know what that was about...but it was a fun way to kill time before the check-in counters opened.
- After she has checked me into the Kunming-Bangkok flight, the airline employee says: "Please sit down there and wait for the immigration counters to open"
"...ah, and when will they open?"
"When the officers are on duty"
"...no, I mean..." What do i mean? How do I explain it? "Well...alright...yeah sure, thanks..."
- The Chinese city of Guangzhou has its own version of the fake Buddhist monks: they hang around the square in front of Guangxiao temple, they hand people some cardboard charms and ask them to donate ridiculously huge sums of money (read about the Kuala Lumpur phonies here).
- The local authorities in Kunming (which is not even a major Chinese city) have decided to create a new town out of the city center. Government buildings and university campuses (many times as big as the old ones) are being moved there.
- Supermarkets, shops and some restaurants run out of iodized salt for a few days due to the panic induced by the Fukushima nuclear plants radiation threat.
- The rubbish bins at the Green Lake in Kunming automatically open their doors and wish you good luck after you dispose of your litter.
Read "Chinese oddities/1" here
Posted by Fabio at 4:25 PM