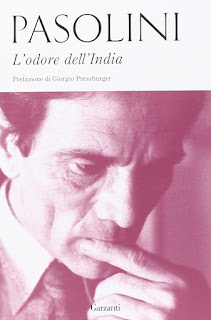 In 1961, Pierpaolo Pasolini - Italian poet, novelist, journalist and film director - joined colleague authors Alberto Moravia and Elsa Morante on a month-long trip to India.
The entries in this travel diary mostly reflect the author’s reactions to the situations he’s experiencing in terms of feelings and sensations - and some cultural/religious interpretation - rather than being cool headed rational, sociological and political explanations of them. India comes out as a barren, dirty and bad smelling pile of shaky buildings, open-air sewers, busy roads and temples, populated by a vast majority of multi-religious, ragged, placid, kind and sweet people, and a still new, stunned and unprepared well-off minority, whose only human strengths are their webs of family ties.
Yet some features of this traditional society - whose stratifications survived the waves of foreign invasions and occupations by gradually degenerating, but are still similar to the ones that characterize poor peasants all over the planet (including some areas in the Europe of those years) - could actually serve as an example to a western world where the recent wave of bourgeois conformism is totally disconnected from the issues and needs that humanity has had to face for thousands of years.
In order to understand some of the passages, the reader has to keep in mind that at the time of writing, western society was still anchored to some ideological axioms that would later be shaken by the major geopolitical events of the following decades.
An interesting read offering the point of view of a very refined European intellectual traveling to India sixty years ago.
Original title: L’odore dell’India.
Posted by Fabio at 7:56 AM