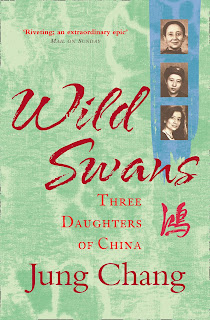 This novel reminds me of great family sagas such as War and Peace, One hundred years of solitude or The house of the spirits, where the authors tell the history of their respective countries over many decades through the vicissitudes of a few generations of one or more families.
Jung Chang recounts the history of twentieth century China while writing the biographies of three women: her grandmother, her mum and herself. The story starts during the last years of the imperial era, when young women still had to go through the ordeals of bound feet, concubinage, seclusion and de facto slavery. It goes on narrating the events of Sun Yat-Sen’s revolution, the warlord epoch, the Japanese invasion and occupation of Manchuria first and of the whole country later. At this stage the author’s grandmother is the main character and her mum is still a young girl trying to find her place in a fast changing world. The civil war between Chiang Kai-Shek’s Kuomintang and Mao Zedong’s communists and the first decade of the People’s republic see Jung Chang’s parents as the two adult protagonists, with good job positions in the Sichuan’s provincial party administration. This is the time of the unrelenting purge campaigns (first against former Kuomintang members or rich landowners, then against more or less imagined internal opponents), of the Great Leap Forward and the resulting terrible famines which decimated the Chinese population. The author becomes an adult at the time of the infamous Cultural revolution, during which the country’s heritage, culture, economy, infrastructures and very identity are dealt an almost deadly blow. One by one the family members become the targets of the factions that get the upper hand at the various stages of the ten-year-long collective descent to a social and political abyss.
The book ends when the author, having been awarded a scholarship, migrates to the UK, where she still lives and works.
A must read to understand the recent history of this great country.
Posted by Fabio at 7:39 AM