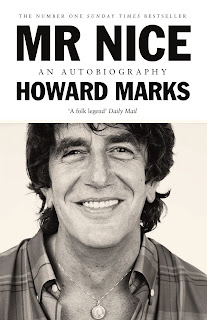 I’ve seen this book on the shelves of the second hand bookstores of pretty much all the places I’ve visited in the last two decades. It’s one the young travellers’ favourites. Sometimes a shop might even have three or four copies of it, which for a used book is a lot. It’s not surprising though, being it the autobiography of Howard Marks, a famous dope smuggler that eluded capture while importing tons of weed and hashish to the US and Europe for decades, making millions of dollars, living in luxury in England, Switzerland, Italy and Spain, smoking the best cannabis, visiting exotic places and living an adventurous life. A hero for many young travellers.
And that’s exactly why I’ve always ignored it: I thought it was a shallow and silly topic. Last month though I changed my mind and bought a copy of it. The guy was really “nice”, extremely talented and smart. Before becoming a smuggler he got a higher degree in Physics at Oxford University, Balliol College. He was not a ruthless criminal at all, he never engaged in violent activities and he only strictly stuck to cannabis products. No heroin, cocaine, pills or meth.
The story reminds me a bit of “Shantaram” by Gregory David Roberts, with a touch of Keith Richards’ “Life” and obviously a pinch of other dope smugglers' biographies, such as “Blow”, a movie featuring Johnny Depp.
If you liked any of those stories you might also enjoy this one.
Posted by Fabio at 9:07 PM