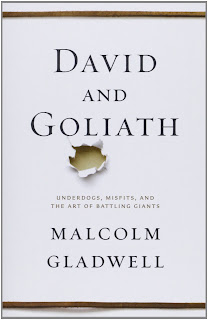 The question and wonder that has become a metaphor: “How did David manage to achieve such an improbable feat as beating Goliath?”.
The answer, as Malcolm Gladwell suggests, can be found in another question: why do we suppose that David is the weaker party, the underdog, the likely loser?” Maybe we haven’t assessed the situation well enough. Let’s see: Goliath is an awkward giant (probably due to a rare disease), pinned to the ground by a heavy armour, nearly blind (probably due to the same illness), not agile, armed with swords and daggers, ready for close range combat, in the middle of a vast expanse with no defense supplied by the environment. David, on the other hand, is slim, young, agile, dressed lightly, coming down from a hill, armed with a sling that he is very skilled at using (he’s a shepherd by trade, and he often has to chase - and kill - fierce predators). Plus, he is clever, and is not gonna engage his enemy on a body to body fight. He stops a few dozen meters from Goliath, loads his sling with a heavy stone and shoots. Bang! Goliath can’t even see the projectile coming, is hit on his head and dies on the spot.
Surprised? Really? Does it look like the giant even had a chance?
There are countless other examples of apparently surprising success stories that actually shouldn’t surprise us at all, if we analysed the odds more accurately.
Wanna find out more? Gladwell’s book is unsurprisingly full of inspiring examples.