The art of happiness - The Dalai Lama 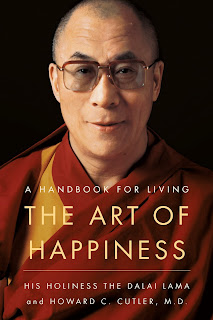 A good thing about the current pandemic is that I’ve had plenty of time to read. I'm currently updating a list of the best books I’ve come across so far. Please see my home page for the previous entries.
#14. Few people will deny that Tenzin Gyatso, also known as the Dalai Lama, is one of the most charismatic and amazing people alive. He’s the political leader of Tibet, the most popular Buddhist spiritual guide and an inspiration to people from all walks al life.
He’s authored many books and although he’s extremely erudite, clever and wise, I happen to fancy his thinking style better than his writing one. I say this will all due respect. I just find his prose a bit weak, his explanations a little repetitive, verbose and not always easily accessible to non Buddhist readers. His teachings are extremely valuable though, and I find that they are best conveyed by this collection of interviews, written by the American psychiatrist Howard Cutler (together with the Dalai Lama himself, of course).
Through a series of beautifully written questions and answers the Dalai Lama and Cutler explain us why the path that leads to happiness is an inner rather than an external one.
This book might change they way you think, act and live. You should give it a try.
Posted by Fabio at 9:20 PM