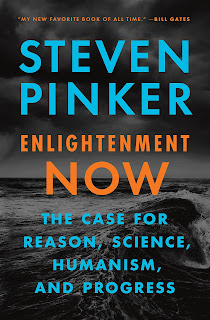 A good thing about the current pandemic is that I’ve had plenty of time to read. I'm currently updating a list of the best books I’ve come across so far. Please see my home page for the previous entries.
This 15th item reminds me of Hans Rosling’s “Factfulness”, a book that we saw together a few weeks ago. The topics and the goals are similar, even though the former is somehow more challenging and philosophical than the latter.
Like Rosling, Pinker makes extensive use of facts, charts and data to prove that despite what progress critics might say, in the past two centuries the world has become a better place. Length and quality of life, health, welfare, safety, peace, knowledge and even happiness have all improved, not just in the west, but worldwide.
As the subtitle suggests this amazing progress has been achieved thanks to the three pillars of the Enlightenment movement: reason, science and humanism.
The enlightenment methods and achievements are not to be taken for granted, though. They must be continuously kept safe from various threats, including cultural pessimism, religious fundamentalism, postmodernism, tribalism, authoritarianism and all sorts of destructive romantic ideologies.
Read this book and join Steven Pinker in this noble endeavor.
Posted by Fabio at 9:22 PM