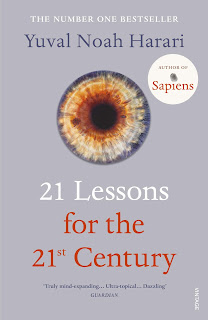 We already met Yuval Noah Harari twice. If “Sapiens” is about our distant past and “Homo Deus” tries to explore what lies ahead of us, “21 lessons for the 21st century” focuses on the missing segment: the one that sees us, rather than our ancestors or descendants, as main characters: the present.
This work is actually a collection of essays that deal in turn with some of the most sensitive issues we face today. Some of the topics are: automation, bio-tech, big data and AI, fake news, nationalisms, religion, terrorism, unemployment, education and immigration.
The book ends with a meaningful yet unexpected advice, something I’ve been addressing in previous posts as well. Don’t worry, I’m not gonna spoilt it, though.
To sum it up: inspiring and insightful as usual. Enjoy!
Posted by Fabio at 8:55 PM