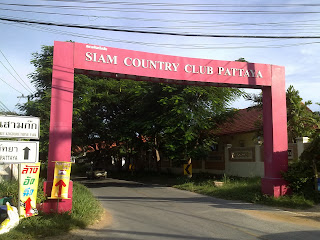 The name is misleading: Soi Country Club. Soi in Thai means alley, but this is a road, long and crowded, lined up with shops, restaurants, resorts, a golf and a polo club, a riding school, the Pattaya Utd stadium and a lake - the Mabprachan - where people come for a short trip, sometimes even at night. Yes, at night. Along the southern shore, in fact, there is a line of bars with nice ladies who won't resist like a sieged medieval fort if a man approaches them, and then beer, music, pool tables, even ladyboys, just like the red-light districts downtown. That's the interesting part: who would want to come here, from downtown? Who is going to drive ten kilometers just to enjoy a lousy and limited version of what can be found a few hundred meters from home?

The answer is not a secret for those who've been living here for years: it's those men, engaged or married, who need a safe place to surrender to the pleasures of adultery without feeling paranoid. The area also offers short-time motels and sauna/massage centers where the hands - and maybe something else - of other obliging ladies will take care of each single spot of their customers' bodies.
Two kilometers ahead the motorbike noise is partially muffled by the cries of some school children. Not only the bike is slowing down here: progress also downshifts and starts creep driving. It's not so much a matter of technology or fashion, as of details and atmosphere. Red dust, flip-flops, corrugated roofs, slanting bamboo poles, the conflict between those old shacks and the surrounding vegetation that still seems it might end either way. It smells like Cambodia, Laos, maybe even Burma, right here in old Siam!
Then a truck puffs black smoke and raises a cloud of dust. In a matter of seconds the road becomes a swollen torrent of motorbikes, cars, traffic lights, with whirlpools of horns, whistles and concrete, that flows all foamy into the six-lane basin of Sukhumvit, with its megamalls, supermarkets, interchanges, crossroads and service areas.
We're back to the beginning…it's already the end.
Posted by Fabio at 3:21 PM