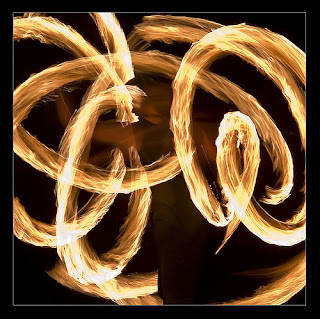 I watch them exercising on the lawn of the small park. The tasteless standardization of their dress code, never affected by updates and seasons. I look at them while they throw clubs, diabolos and rubber balls in the air, two, three, even four at times. They swing poles, hula hoops, chains with wicks linked to the ends - unlighted of course because changing them is expensive and they are on a tight budget - or just colored rags to simulate the flames.
Their serious expressions are what amaze me most. I'm not blaming them for playing of course. I remember the mellow days of my youth at the beach, in parks or even residential streets, sweating with friends or by myself after any sort of ball. The hours spent frying my brains over a meaningless chess movement disguised as life turning point. Even computer games have taken precious shares of my teenager years. I'm aware of the importance of recreational activities for the mental balance of human beings, maybe even too aware of that sometimes. The only university exam I ever thought had a name worth of a branch of human knowledge is called "Game Theory": I decided not to take it only after finding out that it was not exactly about games, not as I could conceive them at least. It was just another engineer deceiving trick.
Anyway, I was just playing, like these people here are, and I was perfectly aware of that simple fact. These guys, their stiff expressions, their bare feet, those loose pants that might actually be skirts, the carefully torn shirts, the supposedly messed up hairdos, beards and side burns achieved after hours spent in front of the mirror, sometimes even those ghastly looking retouched eyebrows, the standardized piercings, the flashy accessories noisily hanging from their necks, wrists and ankles, the silly ridiculous tattoos that they'll hopefully regret having branded their skin with in few year's time, everything about them is speaking of deep social commitment, stern actions in defense of the threatened environment and the oppressed peoples, vegetarianism and veganism in the name of all animals' right to living, strenuous fights and peaceful passive resistance against third world dictators, depraved western democracies, obscure masonic groups that control the world finance, monotheist religions and any other form of evil they might have heard of.
All noble intents, I concede. Only they deceive themselves into believing that they are achieving all that by swirling pieces of plastic in the air and by means of a bunch of useless debates fueled by beer, weed or worse. Because drugs, after all, are the vices of the good, a means to reach some sort of nirvana, a state of harmony between people and the surrounding nature, not at all a shortcut to meaningless fun (which, by the way, I don't have anything against, provided that it's enjoyed without poisonous doses of irritating hypocrisy).
I can imagine that the men do it to pick up girls. This might be particularly true for the nerdish guy riding one of those mono-wheel bikes, leaning against fences every five meters, puffing and panting, trying even to handle three rubber balls while he's at it. Balls that he's holding against his groins, by doing so making them look like massive fluorescent hairless testicles. He looks like Napoleon Dynamite, with greasy Kurt Cobain hair and young Bill Gates eyeglasses. He definitely needs some help if he wants to get laid before the next ice age comes. And the girls, who don't need to add this kind of performances to improve the effectiveness of their mating procedures, probably do it as a form of poetic exhibitionism, not of the alpha male type then, but more of the butterfly, the gazelle or the peacock one.
A group of Thais nearby are performing their street dance moves with a straightforward, bully, childlike, animal, totally natural attitude. Light-years far from being ashamed of it, yelling, laughing, shoving, clapping, cheering and booing. The western tourists - or travelers as they prefer to be called - feel the urge to wrap their human need to have fun in a sense-of-guilt-proof shroud deeply rooted in Christianity instead. Their silence, those serious faces, the withheld cheering or disapproving yells are all signals of an intention to stage a sacred rite. They don't appear at all to be giving vent to their childlike need to play. On the contrary, they seem to be possessed by some mystic frenzy, a tribal priest's propitiatory ceremony trance. They, of all people, the champions of the anti-church crusades, those who call the great bluff of religions, caught with a handful of worthless cards, or, better said, a bunch of inexpensive toys. Their own bluff exposed.
And you cannot even blame it on their young age, when you see that many of them are over fifty or even sixty.
But it's the same old story after all: like them, so many other people always seem to need an excuse to enjoy what they are doing. The rock concert on the square is staged for the workers' rights, the big party on the beach is organized to celebrate the full moon, clubs, poles and balls are thrown in the air to make the world a better place.
Simply having fun never seems to be good enough.