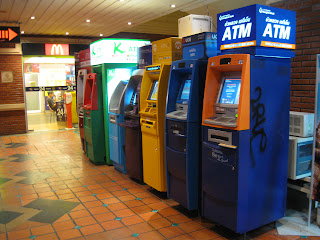 I've hardly ever used traveler's cheques. The first times I came to Thailand I used to get cash with my European credit/debit cards. Of course the issuing banks were charging me a few euro commission, but the fees applied in Thailand were very cheap (20 baht, about 50 cents of a euro). Then, one after the other, like the victims of a virus that having undergone mutation has become deadly powerful, the local banks started to apply a 150 baht rate (almost 4 euros), basically doubling the amount extorted by the diabolic chain of the service suppliers. To let me withdraw my money. I tried the Ayudhya bank, the Siam bank, the Kasikorn bank, the Bangkok bank and many others: the same disproportionate commission was applied. When I asked explanations at a branch the employees told me that they couldn't do anything about it: the measure was part of a law passed by the Thai parliament, extended to every bank in the country.
Accidentally though, I found out that the UOB bank - with parent company in Singapore - was still charging the old 20 baht commission. According to the explanation that I had received these guys were to be considered impudent outlaws, shameless rascals, reckless pirates! That's precisely what made me like them: I continued to use their services for months. Unfortunately one day their immunity from the contagious disease that had already hit the rest of the national banking system vanished.
I can still remember the devastating feeling of disappointment that got hold of me when I saw the damned message on the screen: "Commissions: 150 baht. Continue? Yes-No" With a finger that was almost shaking I pressed "Yes" but since then I have never used an ATM of that bank again. If I had to spend 150 baht I preferred to do it with the aligned sheep that had complied with the new procedure without hesitations, not with those who had fooled me for a few weeks with the base intention of winning my trust and then stabbed me in the back like that.
Still, 150 baht was really too much: even though I was trying to distribute it over the biggest possible withdrawable amounts. One day, however, an admonition, a sort of moral slap, an insult threat that often comes to enlighten me, darted like a jet on the sky of my thoughts, dragging me out of my natural state of benevolent, lazy and meek acceptance of the boundary conditions: accà nisciun è fess' (nobody is a fool here)...if it's good in Naples it can also be good in Bangkok. I decided to demolish the local bureaucratic barriers and to open a Thai bank account, which is not an easy thing to do unless you are a resident or have a stable job here. Most of the banks politely informed me that they could not have me as a client but, as it's often the case, the procedure that for some seems to be a taboo, for others can be a mere formality. I managed to find a branch of Kasikorn Bank where, for a little fee, they opened an account for me, complete with debit card and online services.
Since then the procedures used by the banks to apply the correct commissions at the ATMs have finally become...even less clear to me! I'll try to explain this with some examples. If I withdraw cash from any ATM of my bank I am not charged any fees. And this is crystal clear. However, the same thing happens if I use the ATM of any other bank in Bangkok. And this seems to be a bit funny: how does that bank make a profit out of these transactions? If I am out of Bangkok and I use the ATM of any bank excluding mine I am charged a 10 baht fee, reasonable and not expensive at all. The problem is that I have to pay the same amount when I use one of my bank ATMs too, just for being in a different location. Recently the situation has become even more opaque, since some ATMs of other banks in Bangkok (the combination bank/area is totally random) have started to charge me a 10 or 20 baht commission. Not all of them, of course, and not the same commission at the same bank, otherwise the riddle would be too easy to solve.
This paradox has reached a level of extreme absurdity when here in Bangkok the same ATM, within a fortnight, charged me 10 (alright), 20 (hey!) and 0 (yeah!) baht to withdraw the same amount of money.
I remember the first time I came to Asia, many years ago, and I heard someone talk about cultural differences. Well, back then I couldn't imagine that they were also referring to bank procedures...
Posted by Fabio at 4:22 PM

OMG are you hiding in my wallet?? I also have a Kasikorn account..They charge me 20THB EACH time I use the ATM. At KASIKORN!!!?? Then, if their balls weren't big enough, they charged me 30THB to DEPOSIT 60,000THB at their own ATM. When I got all "farang" and dared to complained, I was politely informed, " If you go inside and wait in the line, it is 40THB charge." WTF is going on here?!?!?!?!

They are becoming more and more greedy...your story is quite funny though!

I am thankful to this blog for assisting me. I added some specified clues which are really important for me to use them in my writing skill. Really helpful stuff made by this blog.
top atm machine companies