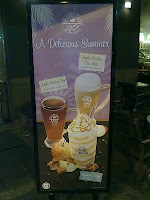 Espresso: it should be very short and concentrated. It's served in a small cup and it only fills half of it. More than that and you might as well order a coffee soup. Espresso is very thick, creamy, kind of foamy on the surface. Italians normally gulp it down in few seconds at the counter, in the early morning or after lunch. It's true, sitting on a couch and reading a nice novel is way better. Yet, if you really want to chill out, why would you have an espresso, which means "fast"?
Cappuccino: The amount of foam should just be the one that naturally flows from the milk kettle, it shouldn't be forced down with a spoon and it shouldn't make the top of the cup look like a Snow White dwarf hat.
Macchiato: the name means "stained". It's simply an espresso with a small amount of milk on top (small amount really means small amount, otherwise they would have called it "drenched" or "soaked", not "stained"). Hot foamy milk for a macchiato caldo, cold milk for a macchiato freddo.

Caramel macchiato: definitely a great drink...with the wrong name though.
Caffelatte: it's what kids drink at home in the morning. No bar owner would ever compromise the reputation of his/her joint by serving such a drink. It's made with a shot of coffee and a whole bowl of milk. Foam on it is as appropriate as an iceberg in the Gulf of Mexico. Cookies (biscotti) can be dipped into it. Very important...the name is caffelatte, no abbreviations: ask for a latte and you'll get a glass of plain milk.
Frappuccino: a fine example of creative nomenclature. It's frappè (milk shake) + cappuccino. We have them both, but would rather die(t) than mix them in the same glass.

Barista: this is not just a guy who operates the coffee machine. We call that a technician. A barista is a barman, he/she serves soft drinks, beer, wine, spirits, sandwiches and salads. He chats with the customers and can attend the tables. Yes, it's true, a technician can also do all that...but it's still a different job.

Coffee sizes: every drink only has one size, and it should satisfy an average grown up human being, not a whole pack of lions. There's no such a thing as grande (which means "large") or venti (which means "twenty"...twenty what by the way? A twenty-day-insomnia?!). Espresso and macchiato are served in a small cup, cappuccino in a bigger one. Caffelatte in a large bowl, and remember: only at home, never at the bar. That's it.

Timing: "cappuccino" and "breakfast" are nearly synonymous. If you order this drink in the evening the barista will put up a very dignified, proud and slightly offended expression, while with his arm fully outstretched he will be pointing at the door, expecting you to leave at once! If you dare order caffelatte instead, he will immediately call the cops. In Italy mafia bosses and corrupt politicians can get away with anything, but for he who insults the national cuisine there is NO mercy!