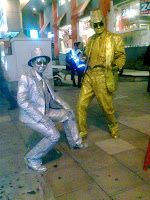 At first there was only one: the golden man. A bold Chinese with suit and top hat, totally coated with metallic paint. You could spot him in Bukit Bintang, motionless, posing, with a donation can and a newspaper cutting: an article about him, complete with a picture. Then, in the same area, the silver man appeared, and not long after that the purple one too. This one stays seated and wears a mask, not even the effort to paint his face. In the meanwhile the golden men have multiplied, but they are only clones, with no theatricality at all. The genuine one, unparalleled actor, now poses with a silver painted female colleague.
Three ringgit for a picture, you can see them everywhere, some surrounded by a crowd, others in a empty space.
In Asia a good idea has to be squeezed with haste: copyrights and patents don't live around here.

Photo "Genuine golden man and his silver colleague", by Fabio (Phone)
Posted by Fabio at 5:58 PM