2004 Tsunami: What life is supposed to be - Phuket, Thailand 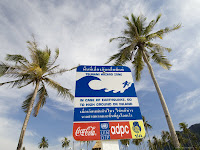 In the year 2004, after the South Asian tsunami, I wrote a long report about those days. I've recently shrunk it into a few paragraph post.

(End of 2004)
It's Christmas day. The course in KL will stop for a week, I buy a low-cost flight and land in Phuket. I was going to Kho Phi Phi but I've changed my mind: it's super-high season, expensive and packed. This will turn out to be a lucky move. I stay in Phuket town, a bit far from the coast, and that will be lucky-move-number-two. I join some friends at a party at Nai Harn, in a house with a swimming pool, not far from the beach. At about midnight we head to Patong, we do it Thai-style: three people on a bike. The snake-like road is a slide show of postcards, from the top of the hills we watch Karon and Kata, shiny scythes of sand with moving edges, caressed by the tide, palm leaves and moonlight. We are among the last souls who will see them like this.

It's beach party-time and we hang out until dawn. When we are looking for a secluded spot on the sand, to lie down a while and take a nap in the shade, lulled by the breeze and the sound of the waves, our fate flies low and grabs us by the necks, puts our butts on the bike and takes us home.

I wake up late and go to a cybercafe. Just when I'm about to read the news my mobile phone vibrates and rings. It's my father who from the other side of the planet is telling me what is happening here. I go to my friends' place and we follow the news. I tell them that I want to go to the beach but they say it's impossible, the roads are blocked: I will always regret not having tried. Anyway that gives me a chance to do something else: I go to the relief center, at the city hall, where I'll spend most part of the next two days. I help with the translations and assisting the victims, I talk and listen, observe and learn.

They say that at Christmas everybody feels good, and what a coincidence: it's Christmas time, but the festivity has nothing to do with this, people are good because of the disaster, good or bad, or good and bad. Every feeling seems to be amplified. It's true, there is a girl who keeps walking around, talk loud and pose, smile, laugh and cry, she has sensed an opportunity fluttering in the air and can't resist the temptation to show off a bit. But most of the foreigners are sitting in circles, some around their bags and some around nothing, silent and patient, waiting and thinking. The Thais are handing out clothes and food. An Italian guy walks in swim trunk and flip-flops and that's what remains of his belongings: no passport, cash, credit cards, eyeglasses. He asks me where people like him must report and after I tell him he smiles and thanks me. He still have the will to look nice and polite.

The atmosphere of these days has a surreal edge, it's as if one of those old record players had switched from 33 to 45 rpm. You feel the intensity and you want to absorb it, it fills your chest and drains your brain. After two days I get fresh news about some friends I was trying to locate. One is in Chiang Mai, where he fell in love and never got on the train to the south. One was in Lanta and was hit by the waves but he got away with some bruises and cuts. A Thai girl is working at a beach side resort: I don't know how, but she managed to escape.

The world slows down while I climb up Thailand, I get to Bangkok and I fly back to KL. The intesity drops, sensations are muffled. The more the situation gets back to normal the more I feel hollow, weak and confused.
But there is nothing to be really worried about: this is just what life is supposed to be.

PS A few months later peacereporter.net published a report that I wrote about the effects of that tsunami on Koh Phi Phi.

Photo of a Tsunami warning sign, Koh Phi Phi, by Sergio Pitamitz, from AllPosters.com
Posted by Fabio at 2:18 PM