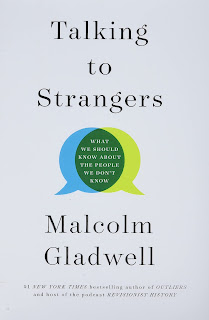 Why are we so bad at understanding whether a stranger is telling a lie? And why is misunderstanding or misinterpreting among humans so frequent? Why do we jump at hasty conclusions about others yet think of ourselves as complicated beings that deserve effort, empathy and lengthy analyses to be properly understood?
Malcolm Gladwell explanation is an intricate mix of three fallible (yet often useful) human tendencies: 1. default to truth (we believe what people say until the evidence against it is overwhelming), 2. transparency (we think we know what people think or feel based on stereotypical behavioral patterns, mostly learned from novels, movies or TV shows) and 3. coupling (people don’t necessarily do certain things just because of the way they are but also because of where and when they happen to do those things).
The wonderful array of examples used by the author to make his point includes: Ponzi schemers, people who committed suicide, dictators, spies, sexual assault perpetrators and victims, murder suspects and police agents.
One of the reasons why I like Malcolm Gladwell is that in his books he often tries to relate some major social issue to a pattern, so that by working on that pattern the situation can be improved and the world can become a better place.
This is the closing line of "Talking to strangers": “Because we do not know how to talk to strangers, what do we do when things go awry with strangers? We blame the stranger”. Isn’t it true?
Posted by Fabio at 9:20 PM