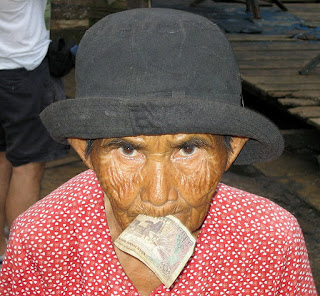 A patient of a large mental hospital is looking outside from behind the gate. He plucks up courage, stops a passer by and asks him: "Excuse me, just a question, how many of you live inside that place?"

The first one is an Indian man, bare chested, flapping pants made of light fabric, no shoes. His hair is long and ruffled, his skin is dark - Tamil chromosomes mark. His bones are exposed and his muscles darting, thin and tensed. He could be a sadhu whose saffron robe has been snatched by a thief or a natural catastrophe. His face is not thin as other thin faces are: it's a skull covered with dark leather and bristly hair, and little more. His eyes are two huge floodlights, goggled, like those of a hunted down beast. You can spot him everywhere in the city center, while he walks, almost running, fleeing from the enemy, only partly imaginary, that has been chasing him for years wherever he goes.
Then there is a bearded man, who constantly holds a banknote with his right hand, turning it over again and again, making it twirl between his fingers like a magician, while he carefully looks at it, studying it as if it were a mysterious object, fallen there from another world or another time. In the meanwhile his left hand is gently stirring in the air, leading an orchestra of ghosts that, no matter what direction he is facing, is always arranged in front of him.
In another road you can meet the one who never stops talking to himself, fast, mumbling, in a low voice, in god knows what language, continuously walking along the sidewalk, transversally, from shop to road, from road to door, from gate to road...
Another one, long haired and bare chested, always walks holding his pants with one hand, as if they were loose and he didn't wear a belt to keep them up.
There is also a guy who lies down on the sidewalk, his back leaning on the wall of the building and his legs stretched out, ready to trip up the wealthy and respectable passers by. The same cigarette, unlit, in one hand, while the other one plays an invisible piano. Muttering something with a satisfied look, he's stretching out there not really with the air of one who doesn't know where else to go but as if this was actually the most comfortable couch in the coolest living room in town.
However, the leading figure among the KL street characters, their archetype, their undiscussed quintessence, is the great globe guy.

When you have left the Malaysian capital and you've landed in Bangkok, across the taxi window the most bizarre character appears. A skinny guy, with broom-like hair and tow beard, walks around wearing only a filthy t-shirt: he's stark naked from belly-button to shins, his skin protected by a thin layer of greasy soot. Two stuffed plastic bags, tied around the ankles, wrap his feet like homemade Moon Boots. With other bags hanging from his hands, neck and shoulders, he's standing on a sidewalk, waiting for the green light among housewives and office workers. It's such a surreal sight that it could well be a mirage.

I met the old lady of the picture in Hoian, Vietnam. She came begging, hunched: thousand wrinkles were twisting about her face, forming ever changing shapes around the four fixed objects while she was imploring us to give her something. I pulled a note out of my pocket and handed it to her, along with an amused smile. She got hold of it and swiftly put it in her mouth. I don't know whether she did it for gratitude, to store it in a safe place or as a talismanic gesture. All I know is that she left, holding that precious worthless gift between her lips.
Posted by Fabio at 7:32 PM