Cinema as a Zen practice 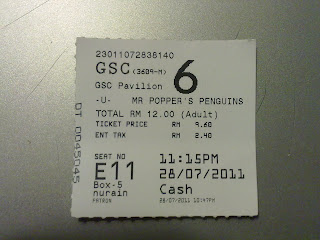 When I'm in Kuala Lumpur my days tend to follow a sequence that rotates and wraps itself up in a gauze of soft invariability. The mental weariness caused by a day of lecturing and its physical counterpart due to some jogging and a couple of push-ups come to meet me in the evening: they take me by the hand and walk me to a movie theater downtown.
Most of the times I'm not really interested in the movie itself: in Asia the multiplex cinemas often feature American and Chinese blockbusters or local stuff that you can't really trust. I rule out by default the ones of the second category and I chose the less toxic title of the first one: it often turns out to be a concoction of action, deafening noise and special effects: the usual bore meant to stimulate the production of adrenaline that ends up making you sink into a state of hypnotic daze instead. As far as I am concerned a good movie depends on: 1) story and director, 2) actors, 3) photography and music. Any other frill can only serve the purpose of concealing the lack of those main ingredients.
However, as I said, what really draws me to the theater has nothing to do with my passion for visual arts: I take care of that with some DVDs when I need to. No, what I really follow enchanted while I'm on the escalator are the notes of a different piper: getting swallowed by that black world scarred by slanting lines of white lights, being vaguely aware of the air-con blow that cools without freezing, reaching the seat next to the aisle, possibly without neighbors, carefully chosen at the box office, stretching out on the armchair - comfortable but not too soft - and letting the hum muffled by the sound-absorbing panels tickle my eardrums during the minutes that lead up to the commercials. When the show (show?) has already started, ignoring without the slightest spot of irritation those who talk and disturb a movie that is not really worth of respect, adjusting to the light air of an awkward drama or of a silly comedy, relaxing my muscles, activating my soul, meditating, slackening the reins of my brain, thinking, being pierced by such a beautiful sentence that it feels as if it was thought by someone else and jotting it down on my phone. Peeking now and then at the deer-like face of the pretty girl who's sitting a few seats away, then feeling ashamed for this fifth grader's instinct and directly jumping to the eighth grade by looking at the legs of a hot chick wearing a jeans miniskirt and high heels, while the tough guy who's sitting next to her is bewildered by a monotonous sequence of fast scenes and deafening sounds. Moistening my lips with a fake pervert air, laughing to myself for this form of self-inflicted sense of humor and while my temple is scratched by yet another sentence - somewhat less philosophical than the previous one - grabbing the phone again and challenging my creativity by trying to write some longshoreman's obscenity with the most poetic verses I can think of.
It's an alternative to Vipassana, Yoga Nidra and Tantra: the experience of a lousy movie as a Zen practice. As it turns out, the ways to reach Nirvana appear to be countless.
Posted by Fabio at 3:24 PM