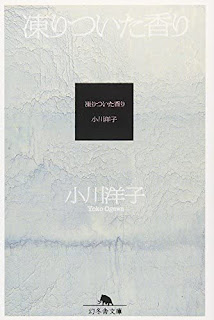 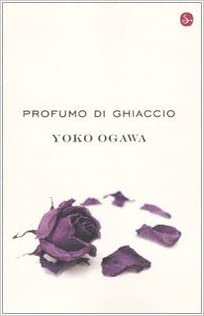 I don’t think there is an English translation of this book. At least I couldn’t find one, even searching the web. That’s why I’m mentioning the Italian title next to the Japanese one. If there really isn’t a translation of this novel in the most important language in the world, well, that’s a pity. This story is a good example of the peculiar Japanese fondness for details, surgical change of pace, tactfulness, delicacy and melancholy. Even of their atavistic tendency for seppuku or harakiri.
The novel is about the quest for truth of a young woman whose fiancé has recently committed suicide. A quest that will take her to the world of fragrance masters and mathematics geniuses, Japan and Czech Republic, hard reality and magical myth.
Ogawa Yoko deserves a place among the greatest contemporary Asian female writers. No, I’m wrong. She deserves a place among the greatest contemporary Asian writers, period. 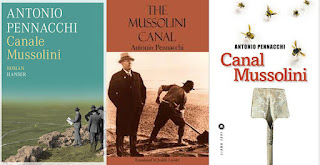 Besides being an excellent read, this is also a very good summary of twentieth century Italian history: the rural society at the turn of the century, the First World War, the socialist uprising, the birth of fascism, Mussolini’s takeover, the Second World War, the post war reconstruction and the ensuing economic growth. These events are all part of a story which revolves around a family - the Peruzzi - from the Veneto (that’s actually where I come from). They are sharecroppers, people who - for generations - have worked the land and farmed animals, gone to war, brought up dozens of children, eaten meager meals and made up for that by drinking barrels of wine, coped with natural disasters and famines, economic crises, pandemics, political instability and social abuse, who have fallen in and out of love, made friends and enemies, fought family vendettas and formed strong social bonds.
By the end of the second decade of the last century the Peruzzi are finally well off, not rich but not poor either. Then the economic situation changes - the infamous “quota 90” - and they end up losing everything. The Peruzzi have connections in the fascist government though, and they manage to be included in the migratory wave that will bring them from the “Nordest” to the “Agro Pontino”, not far from Rome, a previously swampy area infested with mosquitoes, plagued by malaria and teeming with bandits, that neither the Romans nor the Pope nor Napoleon have managed to reclaim. Yet, the stubbornness of the fascist government, willing to leave its mark on history, has finally succeeded to turn the region into a modern farming jewel, awaiting expert farmers to work it. The Peruzzi, along with thousands other families from the Veneto, the Friuli and the Ferrarese, start afresh and join the mission. A new world is set on motion, with all its dramas, romances, tragedies, parodies, heroes and antiheroes.
This is the book the author claims he was born to write. It is a novel you will surely enjoy.
Posted by Fabio at 4:24 PM No comments: 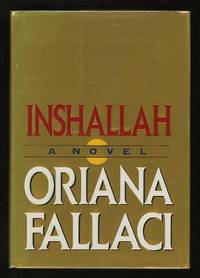 A novel based in Beirut, Lebanon, during the 1982-84 Italian army peacekeeping mission..
The Israeli army has recently invaded the country and ousted the Palestinian fighters. Along with American, French and a few British soldiers, Italian sailors, paratroopers and Bersaglieri are patrolling the sensitive areas in and around Sabra and Shatila, where a few months earlier bands of Maronite phalangists had carried out a terrible massacre.
On October 23, 1983, two suicide trucks loaded with explosive hit the US and French headquarters, killing hundreds of army men. At the Italian base everyone is waiting for the third truck, which will never come. The following three months - before the contingent departure - Italian officers and privates will cope with war, guerrilla, poverty, desperation, love, pity and passion. Each one in his own way. For all of them life will never be the same.
Very interesting account of a key phase in the still ongoing Middle East crisis. Fallaci is a skilled and experienced war correspondent. In my opinion in this book she makes too mush use of stereotypes and regional lingo, along with frequent word-by-word repetition of some character’s thoughts. Still, this remains the most informative book on the subject I’ve read, along with “From Beirut to Jerusalem” by Thomas L. Friedman. 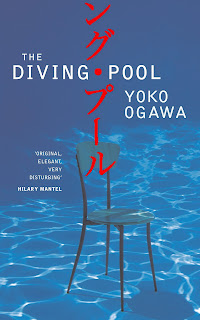 This is a collection of three short stories, novellas actually. Each story has a young woman as the main character. The first one is watching closely her childbearing older sister, the second one is visiting the boarding house where she used to live as a student - now almost empty - and the third one is experiencing a life crisis at the orphanage managed by her parents, where she also grew up.
Ogawa’s care for detail, both physical and psychological, draws the reader’s attention to the scenes and the circumstances of the stories in a very peculiar way. I felt that the author was playing with my deepest emotions when, for instance, the lady in the boarding house is looking for what could have been the blood dripping corpse of her cousin and turns out to be a honey oozing beehive instead. Or when the girl at the orphanage is sadistically harassing a toddler, ending up being discovered by the guy she loves, possibly losing him forever as an undisclosed consequence.
I really felt distraught and upset, something not even splatter movies directors are able to achieve. Pretty impressive.
Posted by Fabio at 9:43 PM No comments: 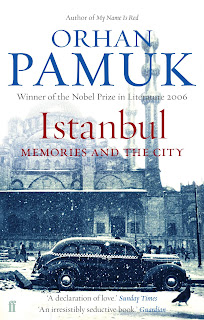 I’ve seen this book on the same shelf of my parent’s house bookcase for a few years. I thought it was a novel, I don’t know why. When I finally picked it up I found out that it is actually a collection of memoirs. Every chapter deals with a different topic. Sometimes it’s an area of the city, sometimes a person, a building, a situation, a life phase. This work doesn’t feature a proper narrative thread. It is rather a set of recurring themes - mostly sensations - that keeps together not only the pages of the book, but - the author feels - also the city and the people who live in it.
Istanbul - aka Byzantium or Constantinople - and its inhabitants are torn between the desire for modernization and westernization on one hand, and the melancholy and longing for a glorious past which is no more on the other: poverty, mess and filth are always there to remind one of the reality of that loss. The author is himself caught in this contradiction. He feels sad about it and wonders if this is the same sadness that permeates the whole place. It’s a kind of sadness which the city doesn’t experience as a consequence of some misfortune, something that can be overcome with action or a change of mind, but rather like a basic feature of one’s character, which has to be worn with patience and dignity, even pride maybe.
The author’s style is very refined, his thoughts accurately woven, his prose elegant like the interior design of an Ottoman palace hall. The book is intentionally soaked in a (Turkish) bath of melancholy and sadness, which are corroborated by the beautiful black and white photographs that dot many of the pages.
I don’t remember exactly whether I had some of the author’s impressions when I visited Istanbul many years ago. It was a short trip anyway, just a stop-over really. I know for sure that I wish I will visit the city again after reading this book. And the others that Pamuk recommends as well.
Posted by Fabio at 6:17 PM No comments: 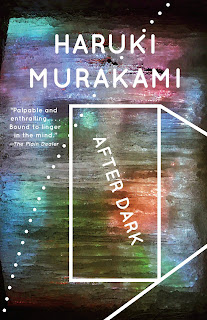 I try, I always do, I swear. I really try not to buy another book by this author when, while walking past the bookstore section dedicated to him, a novel that I still haven’t read catches my eye. The first thought that comes to mind is: “Come on, your reading list is so long and varied, and you’ve already read quite a few of Harukis’s books recently, no need to buy another one so soon!” Famous (and useless) last words, I think, while I walk out of the shop intrigued by the synopsis that I’m reading on the last page of the paperback I’ve just purchased.
“After dark” is a short novel that can be read in few hours. It does not feature the usual surreal and outwardly set of characters and bizarre situations of all of the Murakami’s novels - but one - that I have read: “The wind-up bird chronicle”, “1Q84”, “Killing commendatore” and “Kafka on the shore”, just to name a few. And it’s not hyperrealistic and nihilistically dramatic like “Norwegian wood” - his first major hit - either.
The story unfolds over the course of one night and deals with the lives of a bunch of Tokyo residents who seem to have little in common and whose stories, nevertheless, intersect and interact for a reason or another. As usual Murakami might be using the events narrated in the book to dig into the meaning of life coincidences, destiny, purpose, relations and fate. Or he could just be telling a story for the sake of it.
It’s up to you to decide how you want to interpret and enjoy the book.
Posted by Fabio at 8:13 AM No comments: 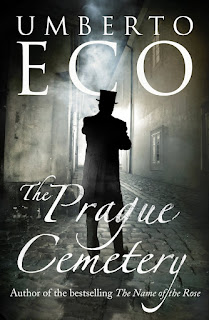 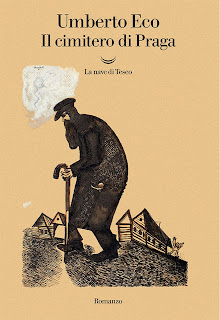 It happened a few times while I was abroad. I said that I was from Italy and the person with whom I was speaking suddenly informed me that their favorite author was also Italian. Once they even asked me to guess who it was. Dante? I thought. No, too old. Montale? Too obscure. Volo? Come on! I give up, who is it? But of course, Umberto Eco! That was their answer. Eco? Wow, I’m surprised, I said. But why was I surprised, then? I have read my first Eco’s novel when I was a kid (if you guessed “The name of the rose”, well, you guessed right) and I have read every novel by him I came across ever since. I loved each and every one of them. There was no reason to be surprised at all.
I hadn’t read “The Prague cemetery” yet, being one of his most recent works. And of course I’m glad I did finally read it. His usual brilliantly orchestrated complexity, his enormous vocabulary and knowledge of language technicalities, his history expertise - European middle age in particular - with all its corollary of mason lodges, monastic orders, political scheming, military affairs and conspiracy theories: I find it all so fascinating.
This is not only a great novel, it’s also a treaty on counterfeiting, plotting, spying, betraying and lying. The main character does it all by himself, but he might represent a whole section of a secret service, a revolutionary cell, a terrorist organisation, a religious sect, you name it.
I’m so sad that Umberto Eco passed away. I will be forever expecting his next new novel.
Original title: Il cimitero di Praga.
Posted by Fabio at 8:09 AM No comments: